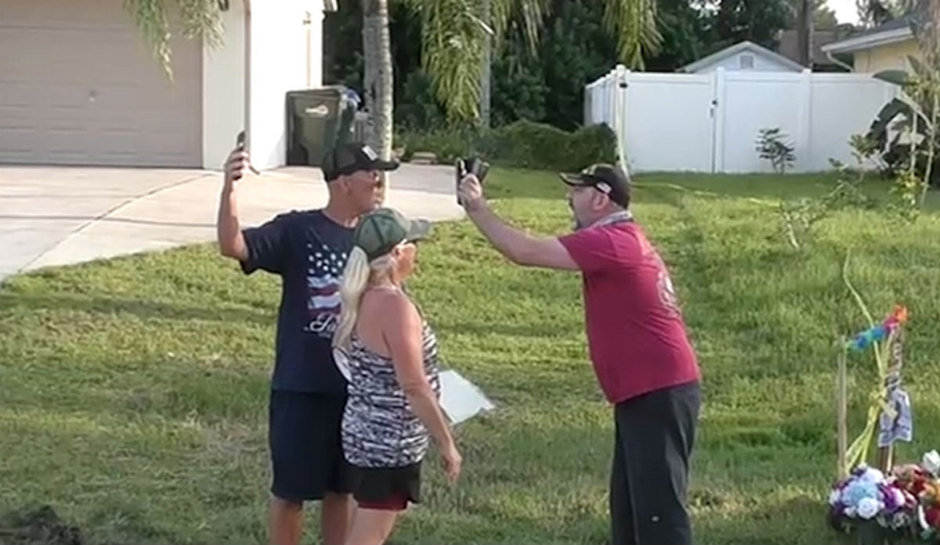 A dispute between a protester and a neighbor near the Florida home of Brian Laundrie’s parents resulted in an arrest on Wednesday.

Fox News reports that two protesters have been at the Laundrie family’s North Port home for the past two days, reportedly screaming over a megaphone and demanding justice for Gabby Petito. When a male protester allegedly stepped on a neighbor’s property to hang a “wanted” flyer of Brian Laundrie, a screaming match and fight ensued.

“You can sit here all you want with your megaphone. I don’t care, but you come on my property again, I’m going to f****** beat your a**,” the neighbor yelled at the protester.

“You’re going to jail,” the protester said. “You just assaulted me on camera.”

A fight broke out in front of the Laundries’ North Port home this evening when a neighbor accused a protester of going on his property.#GabbyPetito #BrianLaundrie

The North Point Police Department confirmed that the neighbor, identified as Angelo Zappacosta, 48, was arrested and charged with misdemeanor assault and battery. Zappacosta is accused of pushing the protester and then swinging at him, but failing to connect a punch.

As CrimeOnline previously reported, 23-year-old Laundrie is wanted on a felony warrant following the death of his girlfriend, 22-year-old Gabby Petito. Laundrie and Petito embarked on a cross-country trip in July, but by September 1, Laundrie returned to his parents’ Florida with Petito’s van, sans Petito.

Laundrie is now on the run, although his parents insist they have no idea where he is. They told police that Laundrie went to the Carlton Reserve in Florida on September 14 and never returned.

Since the news of Gabby’s disappearance and death, protesters, reporters, and others have been frequenting the Laundrie house. While some people have dropped off flowers for Gabby on the Laundries front lawn, others have chanted for justice.