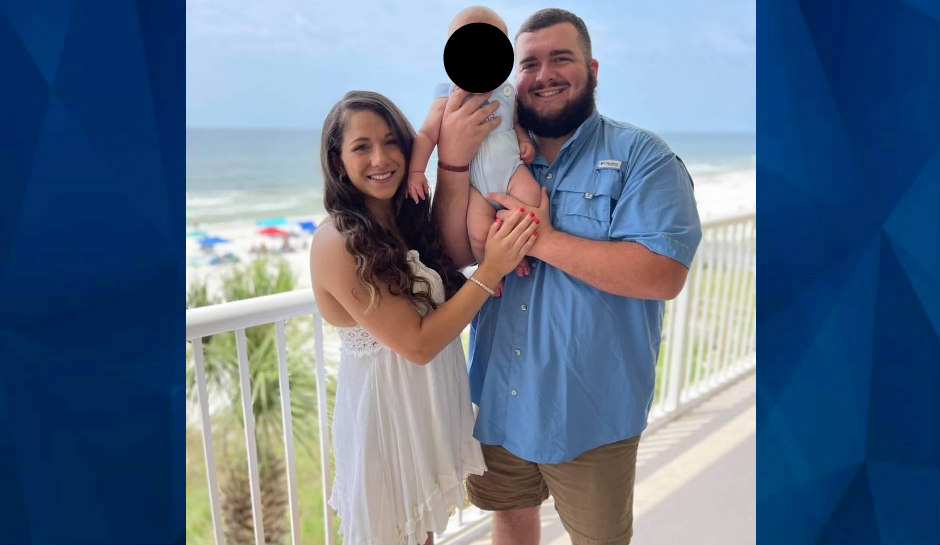 A police officer working his first shift at a small police department in Georgia was fatally shot this weekend, leaving behind a wife and young baby.

Dylan Harrison, 26, started working for the Alamo Police Department on Saturday as a part-time officer. Around 1 a.m. that morning, he was shot outside the police station in Wheeler County. Details about what prompted the shooting or what happened leading up to it have not been released publicly, according to the newspaper.

However, investigators believe the shooter is 43-year-old Damien Anthony Ferguson, who otherwise goes by “Luke,” according to the Georgia Bureau of Investigation, which held a press conference on Saturday afternoon.

The agency issued a “Blue Alert” about the killing, which is meant to notify the public that a fugitive is wanted for severely harming or killing a law enforcement officer and is a “serious threat to the public,” according to WXIA-TV.

A manhunt is underway for Ferguson and a $17,500 reward is being offered for information that results in his capture, as CrimeOnline previously reported.

This is not the first time that Ferguson has allegedly acted violently toward police. His criminal record includes convictions for theft by taking and aggravated assault on an officer, for which he spent more than seven years in prison, according to the Journal-Constitution. He was released from the Coffee Correctional Facility in 2006.

Harrison started working in law enforcement in 2015, when he got a job as an emergency dispatcher in Laurens County, according to the newspaper. He later started working at Middle Georgia State University’s campus police department and had been promoted to the rank of sergeant.

He continued to hold multiple law enforcement jobs at the same time, which is not unusual at small, rural agencies, the newspaper reports.

In 2018, Harrison graduated from Monroe County’s public safety training academy and worked part-time for the Cochran Police Department until May 2020. He also served as a deputy in Dodge County for a drug task force, according to the Journal-Constitution.

Officials mourned the loss of Harrison, who is survived by his wife and the couple’s 6-month-old child.

“Our sincerest thoughts, prayers, and condolences to the family, friends and co-workers of Officer Dylan Harrison who was killed in the line of duty last night in Alamo,” Telfair County Sheriff Sim Davidson posted on Facebook. “We are sincerely grateful for his service.”

Georgia Gov. Brian Kemp and the Georgia Department of Public Safety also tweeted condolences to the officer’s family and colleagues.

“May God continue to be with all who protect and serve,” Kemp wrote in a tweet.

Harrison is the first Alamo officer to be killed in the line of duty, WJXT-TV reports, citing the Officer Down Memorial Page that tracks law enforcement fatalities.

To report information about the shooting or Ferguson’s location, call the Georgia Bureau of Information at 1-800-597-8477.

Wheeler County is located about 124 miles west of Savannah and about 170 miles southeast of Atlanta.