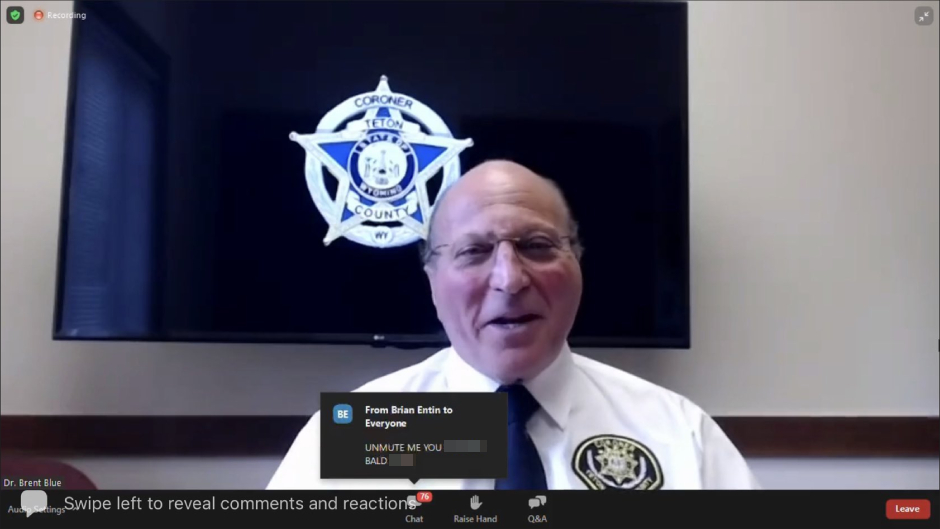 A reporter’s Zoom account was reportedly hacked to harass a Wyoming coroner on Tuesday as he revealed Gabrielle Petito’s cause of death.

NewsNation Now reporter Brian Entin tweeted that it was not him who was in the Zoom chatroom making offensive comments while Teton County Coroner Brent Blue announced that Petito, 22, was strangled. Some users responded to Entin’s tweet with screengrabs showing someone, with Entin’s name, hurling several homophobic and racist slurs in the chat.

“The coroners office says there were at least four people logged into the zoom press conference under my name,” Entin said.

It is not immediately clear who was responsible for the apparent hack.

Here are my screenshots from what was said.. pic.twitter.com/ELJLyAq00h

During yesterday’s press conference, Blue said Petito was dead in the wilderness for three to four weeks before she was found.

Currently, Laundrie is wanted for credit card fraud for withdrawing $1,000 between August 30 and September 1 — when Petito, 22, was missing. Laundrie reportedly arrived in Florida on September 1 without Petito, and she was reported missing on September 11.

Laundrie, who was deemed a person of interest in Petito’s initial disappearance, is believed to have left his parents’ North Port home on September 13 or 14. His parents reported him missing on September 17.