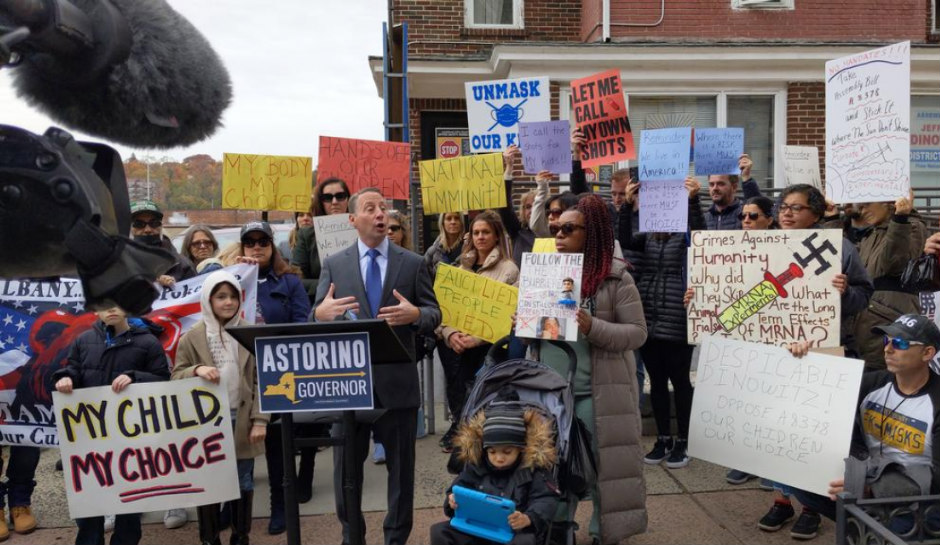 According to the Washington Post, the incident happened outside of Dinowitz’s Bronx office after he pushed for a bill that would require all students In New York to get the COVD-19 vaccine shot before attending classes.

Protesters gathered outside of the office holding disturbing signs, several of which referenced the Holocaust with Nazi symbols. Another protester held a sign with a swastika image that said “Nuremberg Code,” referring to human experimentation that started during the 1920s and consisted of unethical medical practices and “racial hygiene.”

“The display of swastikas and yellow Stars of David outside my office today is repugnant and offensive,” Dinowitz tweeted.

The display of swastikas and yellow Stars of David outside my office today is repugnant and offensive.

People are perfectly free to express their opinion on vaccines or any issue, but to openly display Nazi symbols outside the office of a Jewish legislator is despicable. https://t.co/2a1YVPTbEY pic.twitter.com/NEjFna12Hn

Some of the parents in attendance said that it wasn’t about anti-vaccination, but more about giving the parents the choice to choose whether their child should be vaccinated.

“This is not about vaccinations. It’s not anti-vax. It’s about anti-mandate,” one woman told PIX11. “All parents should have a choice about whether their children are vaccinated or not.”

The protest was reportedly led by Rob Astorino, a Republican candidate for New York governor. Astorino, who said he didn’t see anyone with swastika images until photos surfaced online, claimed he condemned the comparison of the vaccine requirements to Nazi Germany.

Meanwhile, Dinowitz reportedly said that he’s confused as to why parents are so against getting the COVID-19 vaccination for their children.