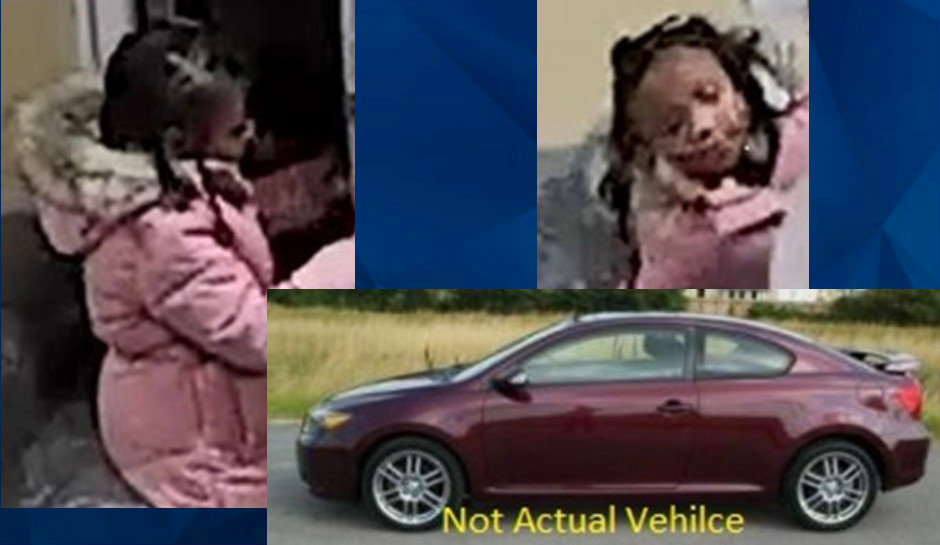 FOUND SAFE: Car Stolen With 6-Year-Old Girl in Back Seat!

Update: 9:30 a.m.: A 6-year-old girl who was in the back seat of a car when it was stolen Tuesday night was found safe Wednesday morning, Pennsylvania State Police said. The Amber Alert issued for Sahara Little was cancelled. Investigators have not provided information about how or where the girl was located.

Pennsylvania police issued an Amber Alert early Wednesday for a 6-year-old girl who was in the back seat of a car stolen the night before.

The little girl has been identified as Sahara Little, who is described as 4 feet tall and 80 pounds with black hair and brown eyes. She was last seen wearing a pink puffy jacket and khaki pants, WPVI reported.

The vehicle is a burgundy Scion with Pennsylvania license plate LKV-1067. The passenger side fog light is out.

WPVI said the car was stolen at about 9:30 p.m. Tuesday from Giovanni’s Pizzeria in Philadelphia’s Germantown section. The mother said she ran in to pick up her pizza, leaving Sahara in the car with the engine running. Sahara was awake at the time, she said.

Police said witnesses described a male suspect jumping into the vehicle and driving off.

“So we believe that this car was stolen as an opportunity because the engine was running. The door was unlocked. The individual who stole the car may not have known there was a 6-year-old child,” said Philadelphia Police Chief Inspector Scott Small. “So hopefully he abandons the car once he finds out there’s a 6-year-old child in it.”