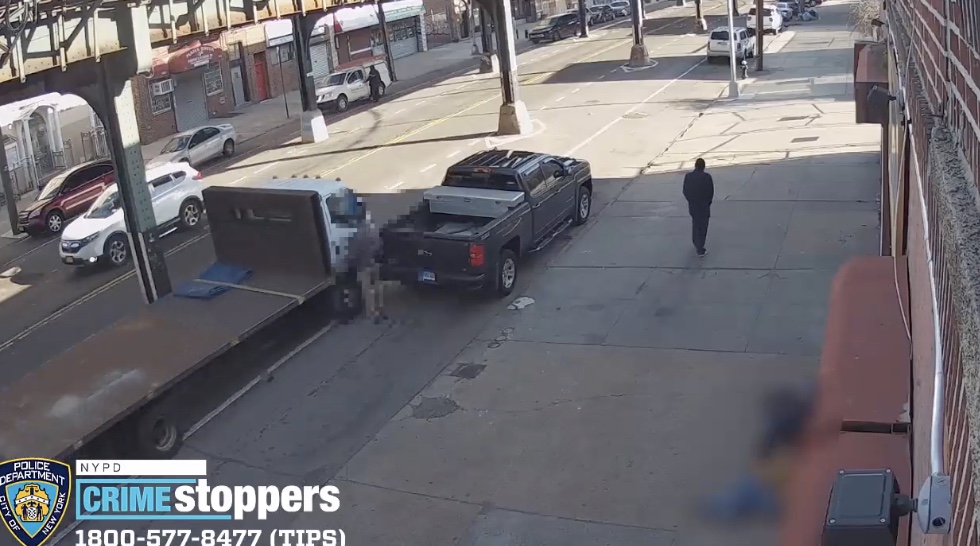 VIDEO: Pedestrian Crushed Between Stolen Flatbed and His Own Pickup Truck

New York police are looking for a man who stole a flatbed truck and then crushed a pedestrian against his own parked pickup in the Bronx.

The 49-year-old victim was rushed to Jacobi Medical Center, where he was said to be in critical but stable condition, the New York Daily News said.

The incident began about 8:15 a.m. on Friday, police said, when the thief spotted the truck with the keys in the ignition in front of a lumberyard. He hopped in and gunned it, ramming into the pedestrian just a block away.

Here is a closer look at the suspect. Again, if you have any information, DM @NYPDTips, or anonymously call 800-577-TIPS. pic.twitter.com/UUAAr6KDMl

The pedestrian was walking around the back of his Chevrolet Silverado when he was hit, captured in a horrific surveillance video.

Employees from the lumberyard rushed out to help the man, according to the yard’s owner, who declined to give his name.

“They tried to help him, pick him up and his body basically fell. He was limp,” he said. “They took his jacket off his body, and it was just broken in so many places. He was screaming in pain. I saw someone picking him up while he was screaming. There was another guy calling 911.”

The flatbed thief kept going after the crash. Eight hours later, he slammed into a utility pole just five blocks away and fled on foot.

Anyone with information is asked to call Crime Stoppers at (800) 577-TIPS. All calls will be kept confidential.