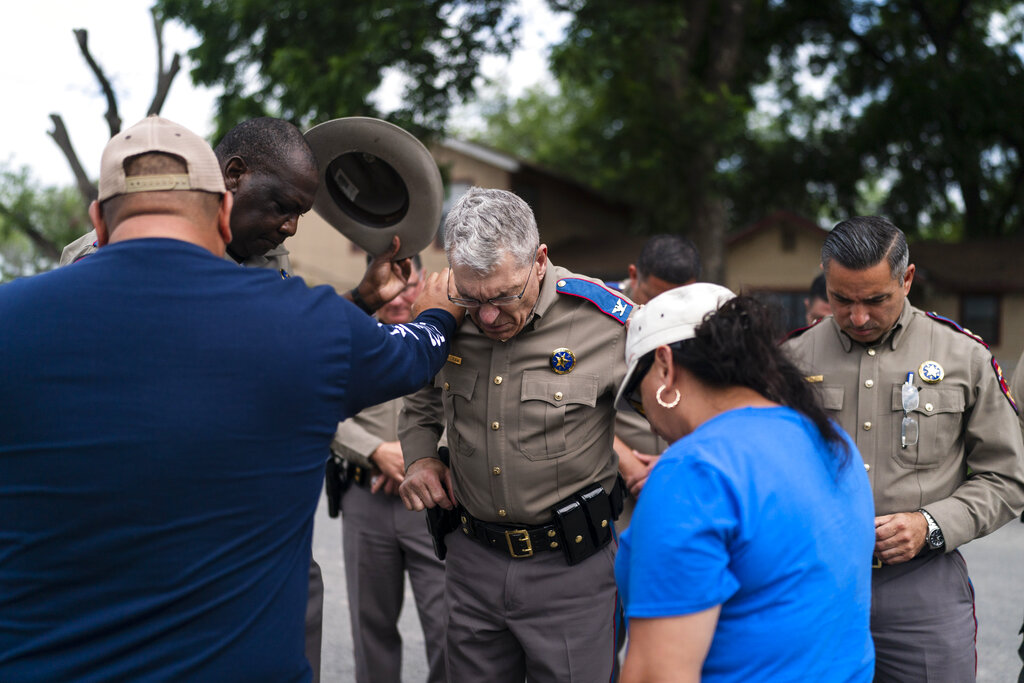 State police spokesman Travis Considine also said Tuesday that the teacher who propped a door open at the school – which Salvador Ramos used to get inside – did close the door, but it didn’t lock.

Texas state police said Tuesday that the teacher who had propped open a door at Robb Elementary School last week closed it again when she realized a shooter was on campus, but the door didn’t lock, allowing Salvador Ramos to enter the building.

Ramos fired into classroom windows as he walked around the building, then went into the same door the teacher had just closed. He entered a fourth grade classroom, where he killed 19 children and two teachers. Seventeen people were wounded.

While the information cleared the unnamed teacher of wrongdoing — the outside door was supposed to be shut and locked at all times and should have locked when she closed it — state police told ABC News that Uvalde’s school district police chief is not responding to requests for a follow up interview.

BREAKING: The chief of the Uvalde school district police department, Pete Arredondo, has not responded to the Texas Rangers in two days for a followup interview from his initial statement immediately after the mass shooting, a spokesman for Texas DPS confirms.

After an ABC report that both the school police and the Uvalde Police department had stopped cooperating with state officials, Department of Public Safety spokesman Travis Considine told told Austin-American Statesman and KVUE reporter Tony Plohetski that the two departments “have been cooperating with investigators” but that school district Police Chief Pete Arredondo “has not responded to a request for a follow-up interview with the Texas Rangers that was made two days ago.”

ABC’s initial report pegged the lack of cooperation on DPS Chief Steve McCraw’s comments on Friday that Arredondo, who was the incident commander of the response, made “the wrong decision” when he kept officers from storming the classroom where Ramos was.

Arredondo determined that the situation had morphed from an active shooter incident — for which protocols require an immediate and forceful response — to a barricaded suspect situation, which would allow officers to wait for more personnel and equipment.

They waited — as many as 19 officers inside the school — for nearly 90 minutes before a Border Patrol tactical team entered and killed Ramos.

It was at the same Friday news conference that McCraw said a teacher had propped open a back door into the school, allowing Ramos to enter, as CrimeOnilne previously reported. But on Tuesday, DPS communications chief Travis Considine said that review of new video evidence showed the teacher had moved the rock she used to prop open the door and pulled the door closed when she realized there was a shooter on the campus, according to KPRC.

Considine said the teacher propped open the door and stepped outside but saw Ramos crash his grandmother’s truck into a ditch and ran back inside to get her cell phone and call 911.

“She came back out while on her phone, she heard someone yell, ‘He has a gun!’, she saw him jump the fence and that he had a gun, so she ran back inside,” kicking the rock away as she did, he said.

“We did verify she closed the door. The door did not lock,” Considine said. “We know that much and now investigators are looking into why it did not lock.”