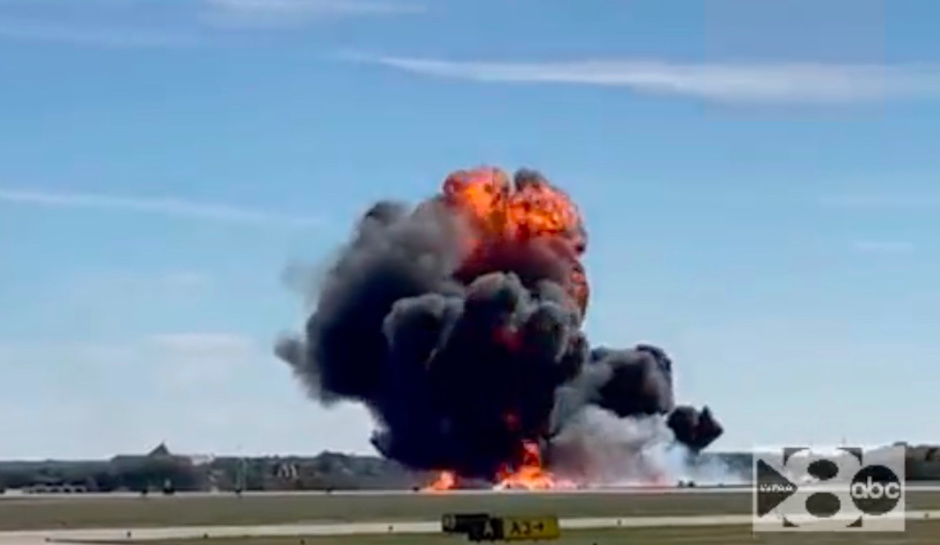 Thousands of people were on hand at about 1:20 p.m. when a Bell P-63 Kingcobra fighter aircraft slammed into a Boeing B-17 Flying Fortress bomber at mid-fuselage. The bomber’s rear fuselage sheered off, while the front of the plane and the fighter crashed into the ground together and erupted into a fireball that sent thick dark smoke into the sky.

Debris fell on nearby Highway 67, prompting authorities to shut it down in both directions.

CAF President Hank Coates said he could not yet release any information about the number of casualties, although there were no reports of injuries on the ground, KDFW said.

#BREAKING: New angle of the mid-air collision obtained by @WFAA shows B-17 and other aircraft flying formations at #WingsOverDallas at 1:21p today, when it was hit by a P-63 and fell to the ground over the airfield at Dallas Executive Airport (RBD). pic.twitter.com/6NAS93b3re

Leah Block, a spokesperson for CAF, told ABC News that she believed there were five people aboard the bomber.

Commemorative Air Force later said that both planes were from Houston, KHOU reported.

The National Transportation Safety Board will conduct an investigation into the tragedy.

Victoria Yeager — 64-year-old widow of Air Force test pilot Chuck Yeager and also a pilot — was at the show. She said missed the collision but saw the burning wreckage.

“It was pulverized,” she said.

“Obviously this is a very challenging time for the families. And when I say family, I also mean the CAF family and our customers that follow us all over the world and enjoy our shows,” Coates told KDFW.