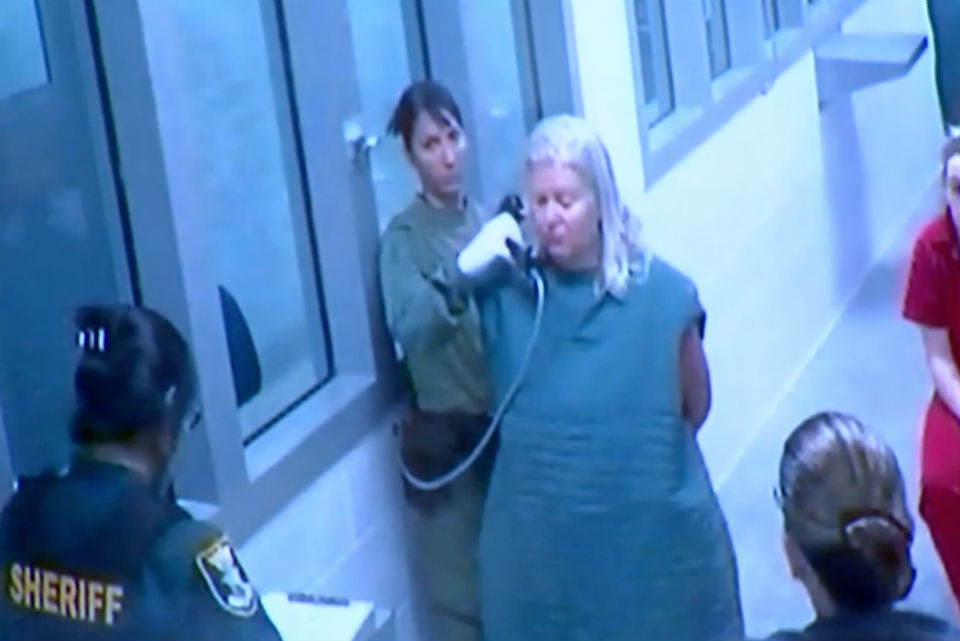 The woman accused of killing her husband before murdering a look-a-like grandmother in Florida is being held without bail in a Florida jail as prosecutors continue to pursue a case against her for her husband’s presumed murder.

As CrimeOnline previously reported, Lois Riess is accusing of killing her husband David Riess at the couple’s Blooming Prairie, Minnesota, home, in March, before fleeing to Florida where she is believed to have murdered Pamela Sellers Hutchinson, 59, in her West Palm Beach home. Riess is accused of stealing Hutchinson’s identification, credit cards and car before going on the lam. Authorities eventually apprehended Riess, 56, at a restaurant in Texas near the border of Mexico in late April.

Inside Edition obtained video footage of a bail hearing in a Florida courtroom, where Riess appeared on a CCTV screen. Arguing that she should be held without bail, prosecutors reportedly said that Riess is refusing to take her psychiatric medication. They did not specify exactly what condition the meds are treating.

The footage shows the first time Riess has been seen since she was extradited to Florida from Texas.

The judge reportedly sided with the prosecution and ordered Riess to be held without bail until another hearing later this week.

Riess is facing numerous charges in relation to Hutchinson’s death, including murder.

“Lois Riess will be going to Florida first while we continue to build the strongest case possible against her here in Minnesota,” Minnesota’s Dodge County Sheriff Scott Rose said in a statement after Riess’s arrest last month.

“We will bring her back to Minnesota to stand trial when Florida is done.”