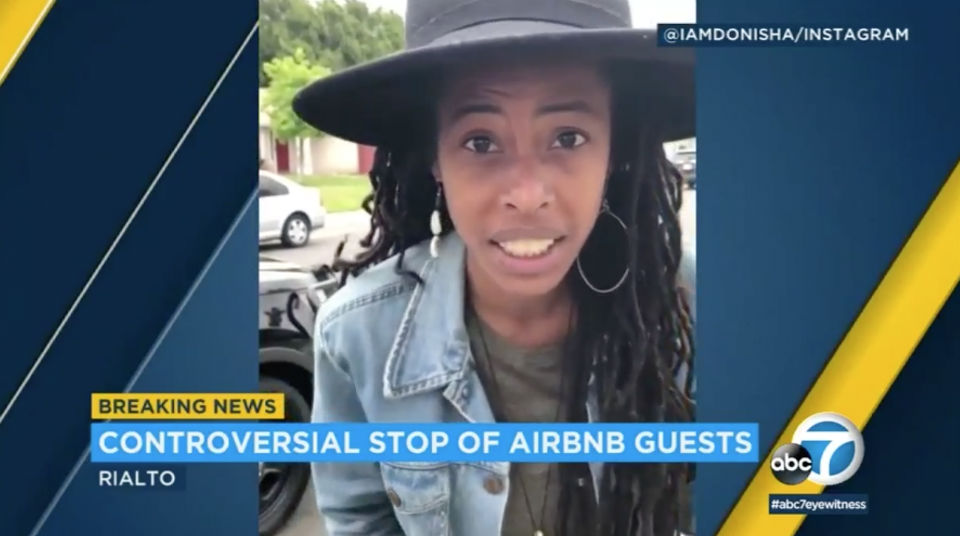 A group of black women leaving an Airbnb rental were mistaken for burglars in an alleged racial profiling incident in Southern California. And now they are planning to sue the local police who responded to the 911 call.

One of the three women is Donisha Prendergast, the granddaughter of Bob Marley. According to USA Today, she and her friends were moving luggage out of an Airbnb in Rialto, California, on April 30 when a neighbor called police to report a possible burglary. Prendergast documented part of the incident in a video post on Instagram that has been viewed over 30,000 times.

My hand was made strong, by the hands of the Almighty. None of them can stop the time. We won’t stand aside and look. We are greater than they wanted us to believe. #belove #buildcomeunity #mightcannotdefeatright #eachoneteachone #standuplove #emancipateyourself #wehavetherighttoberight

Another woman in the group, filmmaker Kelly Fyffe-Marshall, wrote about the incident on Facebook and said that police surrounded and stopped the women for 45 minutes while they investigated the report. Although the women and the police first began to communicate cordially, even joking about the mistaken burglary report, the situation reportedly became tense when the officers demanded documentation of the short-term rental.

“We have been dealing with different emotions and you want to laugh about this but it’s not funny. The trauma is real. I’ve been angry, fustrated and sad,” Fyffe-Marshall reportedly wrote in the Facebook post.

The Rialto Police Department has defended its response to the report, insisting that the women were treated respectfully.

“We didn’t detain anybody, we didn’t put anyone in handcuffs, we didn’t point any weapons at anybody,”Lt. Dean Hardin told ABC 7 News.

“We actually allowed them pretty free movement about the scene, so it’s a pretty mild response to a situation.”

According to the USA Today report, the Rialto police were not familiar with Airbnb. The police department reportedly received notice on Monday from the Airbnb guests that they plan to purse legal action. In response, the department released bodycam footage they say shows appropriate and respectful conduct on the part of responding officers.

In a press conference, the owner of the Airbnb property defended the police department, and said the whole situation could have been avoided if her guests waved back at the neighbor who later called the police.

“It’s courtesy,” Marie Rodriguez said in the press conference. “Have some manners.”