Tennessee investigators are zeroing in on a man they think may be involved in the disappearance of a 14-year-old girl.

Jackson Sun reports that Milan Police Chief Bobby Sellers named 66-year-old Finis Ewin Hill as a suspect in the disappearance of Cayce McDaniel, who was 14 when she vanished after a chaperone dropped her off at her Milan home, reportedly after she attended a back-to-school church party, at around midnight on August 16, 1996.

According to Sellers, however, Cayce may have also been at a party with her mother at a private residence in Gibson County. Several witnesses told police that not only was Cayce’s mother at the party, but they also spotted Hill there as well. Cayce’s mother and her boyfriend maintained that they came home that night at 2 a.m. from a party they attended alone to find Cayce missing, cookies and milk on the floor, and the back door of the family’s home open.

Hill reportedly knew the family and Cayce referred to him as “Uncle Pete.” 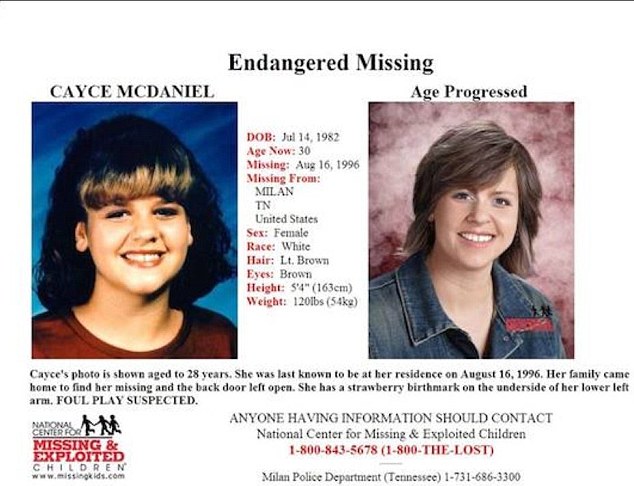 Hill, a convicted felon, was released from prison earlier this year after serving a little over 18 years in prison after approaching a woman in 2003 while carrying a firearm. Court documents indicate he attempted to abduct the woman.

After Hill’s release, the FBI set up an operation with an undercover female officer that was initially intended to gather information regarding Cayce’s disappearance. However, after a few months of online exchange between Hill and the officer, law enforcement had to step in an arrest him before uncovering possible information Hill knows about Cayce.

According to police, during an online conversation between Hill and the female officer, Hill reportedly wrote that he likes to chase women down, rape then, then beat them until they can no longer move. At some point during the online exchange, Hill admitted he had sex with a 14-year-old girl, according to police.

“That’s when they set up the meeting at a hotel room in Mississippi,” Sellers said.

On June 16, Hill drove from Humboldt, Tennessee, to Mississippi after setting up a meeting with the undercover officer, who he thought was a single, struggling mother of a 15-year-old girl. He allegedly told the woman he wanted to have sex with the daughter.

When Hill arrived, authorities promptly arrested him. They found marijuana, condoms, and sex toys inside the convict’s vehicle.

“We wanted to draw this out and try to get more information from him, but some of his actions prompted us to make an arrest a lot quicker than we really wanted to.” Sellers said, according to CBS Memphis. “Since we’ve re-invigorated this investigation, we’ve had more victims come forward who didn’t want to back then out of fear.”

Meanwhile, Cayce remains missing. Prosecutors are hoping that someone who knows something regarding Cayce’s disappearance will now come forward, specifically anyone with any information about the party Hill may have been at on the night in question.

“They can do it in confidence and speak with me or they can go to the FBI,” Sellers added. “This guy is locked up now — hopefully for a while. We feel like there were people who did see Cayce that night outside that church event, and we wish they’d tell us what they know so we can get closer to bringing her back home to her family.”