Sex offender walks into police station, confesses he went ‘into frenzy’ after spotting jogger, slashes her to death: Police

A registered Connecticut sex offender walked into a police station on Sunday and confessed to randomly attacking and killing a female jogger; a woman who he’d never met before, police confirm.

According to the Hartford Courant, William Winters Leverett, 27, confessed to the murder of Melissa Millan, a 54-year-old mother who was out jogging on November, 20, 2014, when Leverett reportedly spotted her.

By Leverett’s own reported account of events, he attended a sex offenders meeting earlier that evening, then felt lonely afterward and yearned for “human contact.” He went to a trail off of Iron Horse Boulevard in Simsbury, where he saw Millan, a top executive at Mass Mutual, jogging alone. He claimed the view of her jogging made him “mentally aroused” and he wanted to approach her and strike up a conversation, but became angry and upset because she seemed “way out of [his] league.”

Leverett told police he began dating a woman a few months prior to the incident and didn’t want her to find out he was convicted of sexually assaulting a child. He said he was “embarrassed and scared and figured that If I just killed somebody it would make all that go away and I wouldn’t have to explain myself.” 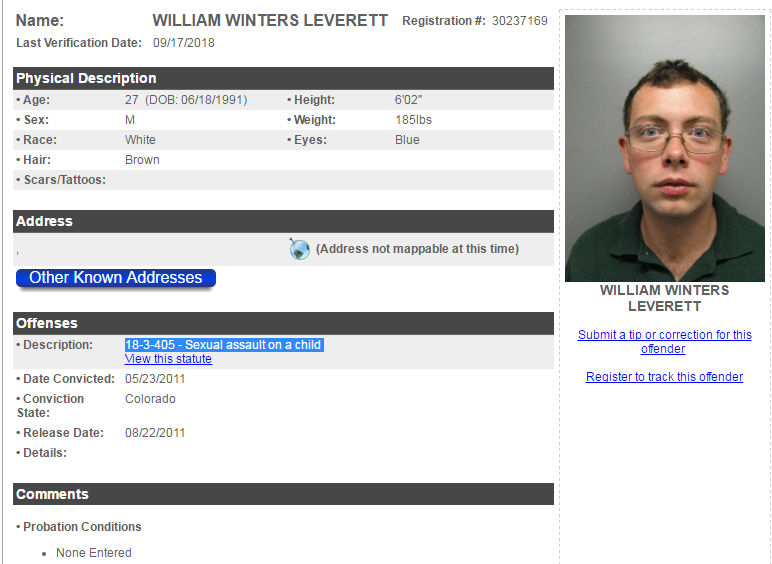 Authorities said Leverett admitted that he had never seen nor met Milan prior to watching her jog down the popular trail. He reportedly claimed he “went into a frenzy” knowing that he could never have her.

The suspect said he hid in an area by a broken trail light and as Milan jogged by, he lunged forward and attempted to scare her at first, but ended up stabbing her in the chest. Milan pushed Leverett away, causing the knife to pull out. Leverett said he still had the knife in his hand when Milan stumbled backward and fell over a guardrail and into nearby roadway.

Leverett confessed he heard Milan say, “oh my God,” before going silent, according to police.

Leverett told authorities to search a barn that once belonged to his family members, for a glove worn when he murdered the victim. Investigators located the glove then obtained a DNA match to Milan. Further, investigators learned from Leverett that he wrote “confession letters” that he never mailed out. Authorities found the letters in the suspect’s apartment in Windsor Locks.

Michael Trazinski, co-pastor of the Open Gate Ministries in Windsor Locks, told the Courant that Leverett confessed the murder to him last Wednesday.

“He came to us on Wednesday night and confessed to the homicide, and we immediately told him, ‘You know what you have to do,’ He said ‘yes, I have to turn myself in.’”

For four years investigators worked tirelessly to solve the murder, but had no leads until Leverett confessed. He remains behind bars on a felony murder charge. His bail has been set at $2 million.