SEE IT: Chris Watts sent unsettling photo of a doll covered by a sheet to Shannan Watts days before her murder — and his father tried to use photo to claim murdered pregnant mom ‘planned’ killings

A photograph of a doll covered by a bed sheet that Chris Watts’s father claimed Shanann Watts took was actually sent to her by her husband Chris Watts, just days before her murdered Shanann and her two young daughters.

Discovery documents released by the Weld County District Attorney’s office have provided extraordinary insight into the murder investigation of Shannan, Bella, and Celeste Watts, as well as the extent of Chris Watts’s deception prior to and after the August 13 murders.

As CrimeOnline previously reported, the documents detail Chris Watts’s lengthy polygraph interview with detectives, as well as a jailhouse conversation he had with his father Ronnie Watts just before he finally confessed to murdering Shanann. Later that same day, detectives spoke with Ronnie and Chris together, and Ronnie appeared to be supportive of Chris’s claims that he had killed her in a rage after seeing that she had strangled their daughters.

At one point, Ronnie Watts appeared to suggest that Shanann may have even planned on hurting her little girls, directing detectives to a Facebook post a few days earlier, in which Shanann had posted a photo of a doll covered almost entirely with a sheet; only its feet were sticking out. Shanann reportedly said in the Facebook post that 4-year-old Bella had arranged the doll this way.

From the discovery documents:

According to the documents, Ronnie told the detectives that he had seen Bella arrange her dolls before, but that he never seen her cover their heads. The detectives asked Chris Watts what he cold recall of the incident, and he said that Shanann thought it was funny. He also said he couldn’t remember if it was Bella who placed the sheet over the doll. 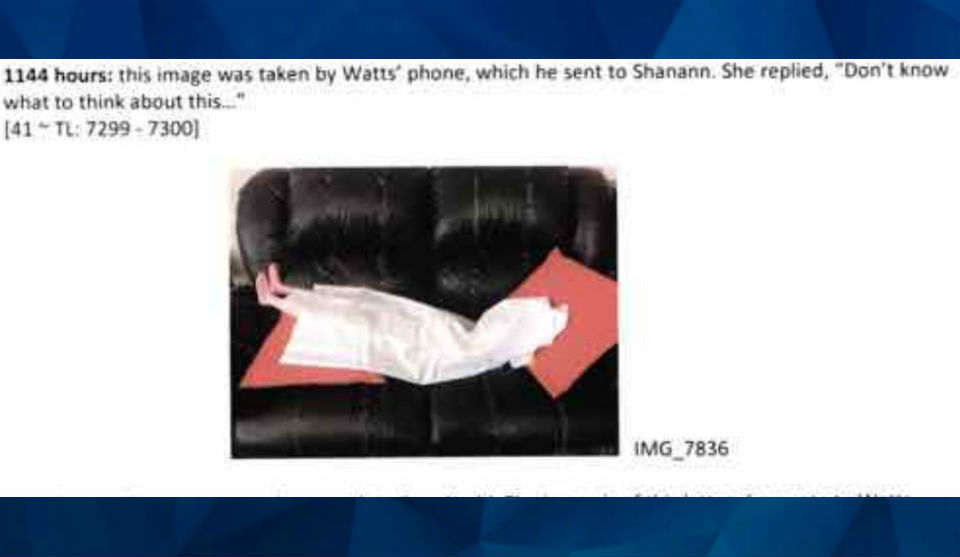 The doll photo is revisited later in the nearly 2,000 pages of discovery documents, which were published by the Denver Post. Included in the documents is the report of a “Phone Data Review” performed by the Greeley Police Department, in which investigators scanned the data from the smartphones of Chris Watts, Shanann Watts, and Chris’s girlfriend Nichol Kessinger. The report highlights text communications, voice calls, and the internet search histories of each phone.

The Phone Data Review includes an image of a doll covered by a sheet, which appears to be the same image referenced by Ronnie Watts. According to the report, the image was taken from Chris’s phone and he sent it to Shanann on August 9. She replied, “Don’t know what to think about this.”

The time stamp on the text message would suggest that Chris was at work when he sent Shanann the message, and the report does not state when the photo was taken. There is no further discussion about the doll photo in the Phone Data Review.

CrimeOnline has contacted the Greeley Police Department for clarification and confirmation of some items in the report, and are awaiting a response.