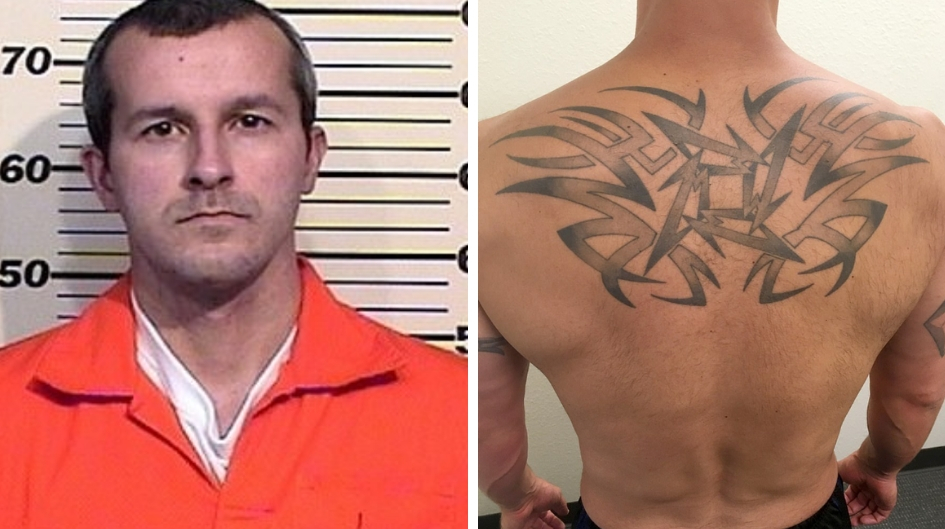 At the time of Chris Watts’ arrest on suspicion of killing his wife and children, authorities in Colorado instructed him to strip down and pose for a series of photos.

The UK Daily Mail obtained the images from the Weld County District Attorney’s Office and published them this week.

Police reports indicate investigators began to interview the same day they took the initial photos, which then became part of the evidence being collected in the case against him.

Authorities explained that they needed to document various portions of his body, including his chest, back, head, arms and legs.

Among the photographic revelations were several prominent tattoos, including a large tribute to the band Metallica.

As CrimeOnline previously reported, investigators reported that Watts searched online for the lyrics to “Battery,” one of the band’s songs, on the same day of his family’s murder.

Among the lyrics is the chilling phrase “Cannot kill the family.”

The encounter with police was captured on surveillance footage, portions of which were also published by the Daily Mail.

While in the Frederick Police Station’s interrogation room shortly after his arrest, Watts appears to confess his role in the violent crime during a conversation with his father.

CrimeOnline also reported that Watts told police that he killed his wife, Shanann, after seeing her strangle their 3-year-old daughter, Celeste, as the toddler’s 4-year-old sister, Bella, laid in a nearby bed apparently unresponsive.

In addition to photos of Watts taken at the police station, the Daily Mail also published an image of the spot his two daughters’ bodies were found buried.