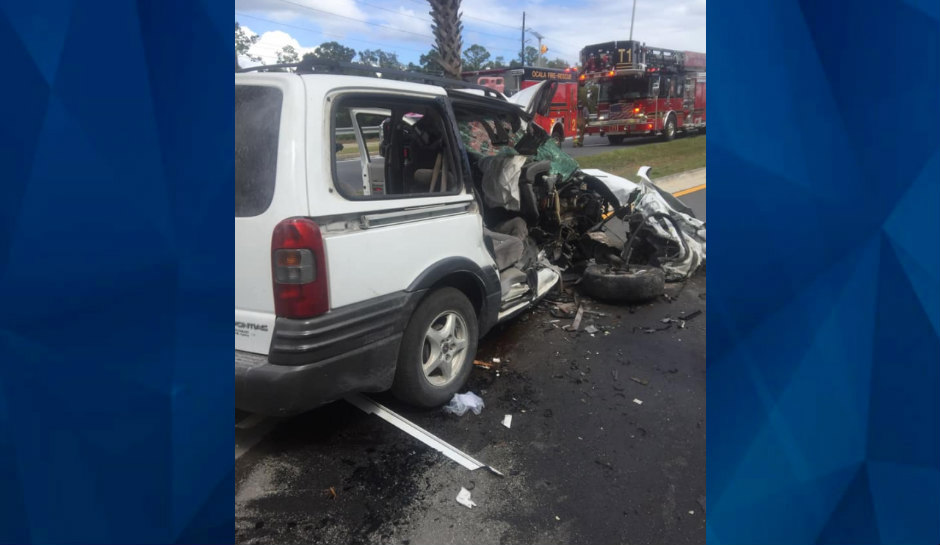 A Florida woman is behind bars after she allegedly told her four children to unbuckle their seat belts before purposely crashing into a palm tree.

Miami Herald reports that 36-year-old Calicia Williams is accused of driving over a grass median at around 2 p.m. on Wednesday before crashing her white Pontiac minivan head-on into a tree. Her four children, between the ages of seven and 13, were inside the vehicle. The incident happened off of Southeast 31st Street in Ocala, according to police.

When authorities arrived at the scene, Williams claimed she was “being followed by a lot of people in cars and she was trying to read all their tag numbers,” according to Click Orlando.

“She made some utterances about a hex from her husband and that’s what made her crash, but we really don’t know the way at this point,” Ocala Police Department spokesperson Corie Byrd said.

The four children inside the minivan survived. They later told police that Williams made them unbuckle their seat belts before she crashed into the tree, and told them that the “devil” couldn’t hurt them.

“The devil can’t hurt you, he only hurts bad people. You have the light of Jesus in you and only Jesus can cure us.”

While first responders were taking the children to the hospital, Williams’ daughter told an officer that after her mother made them remove their seat belts, she told everyone to stretch the hands forward while she said, “Lord Jesus save me,” according to the arrest report.

Byrd indicated that Williams likely kept her seat belt on during the crash, as evidenced by marks on her neck. He added that there was no evidence to suggest she tried to slow her vehicle down before hitting the tree.

“Based on (an investigator’s) findings, he was able to determine there were no brake marks, and based on some of the scuff marks and tire tracks in the median, you can tell she was steering directly toward the palm tree.”

Williams has been charged with four counts of attempted murder. She’s expected to be taken to the Marion County Jail after hospital treatment.