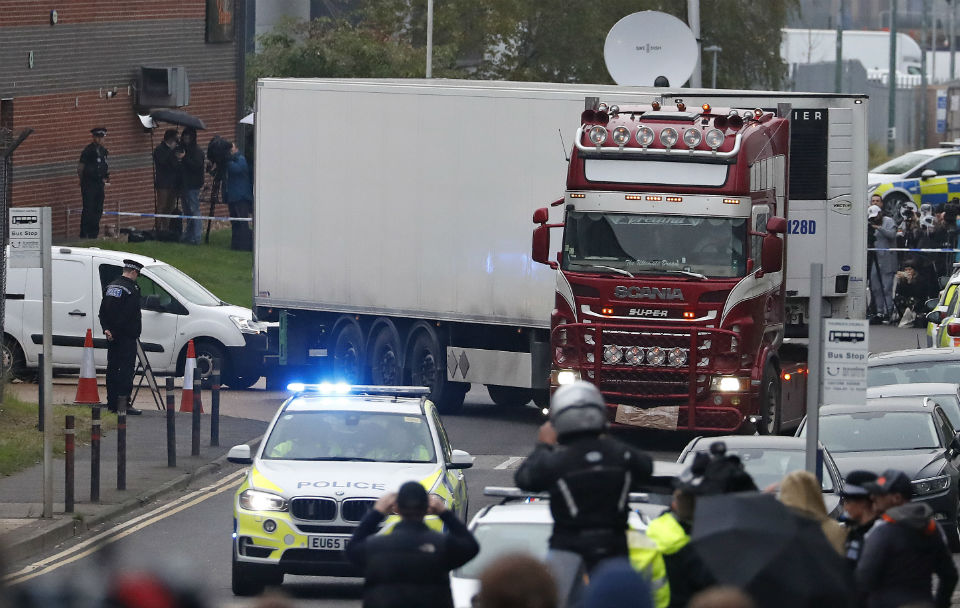 39 people found dead in back of a truck; second truck found with 9 people still alive

Nearly 40 people, including at least one teen, were found dead inside a truck in Essex, England, early Wednesday morning.

CNN reports that an ambulance service alerted police to dozens of bodies discovered in a truck’s container at the Waterglade Industrial Park on Eastern Avenue. Inside the container were 38 adults and one teenager, all dead.

The identities of the deceased are not known, and it is not clear what they were doing in the truck container, although multiple reports indicate that authorities are investigating the possibility of human trafficking. According to the CNN report, the tractor of the truck is believed to have originated in Northern Ireland, and authorities believe it drove to Essex from Zeebrugge, a Belgian port city.

Authorities have launched a murder investigation, and the National Crime Agency is reportedly looking into the possibility of organized crime or gang-related violence, according to the Guardian.

Essex Police confirmed to CNN on Wednesday that the truck’s driver, a 25-year-old man from Northern Ireland had been arrested on suspicion of murder. Paul Berry, a local attorney in the Northern Ireland area of Armagh, told CNN that driver’s name is Morris Robinson. The lawyer said that the suspect is known locally as Mo, and that his family is “salt of the earth.”

Later Wednesday, nine people were reportedly found alive in the back of the truck in Kent. According to the Guardian and CNN, all nine are undocumented migrants and will be transferred to immigration officers following a medical evaluation. The ages, nationalities, and condition of those found alive in the truck are not known.