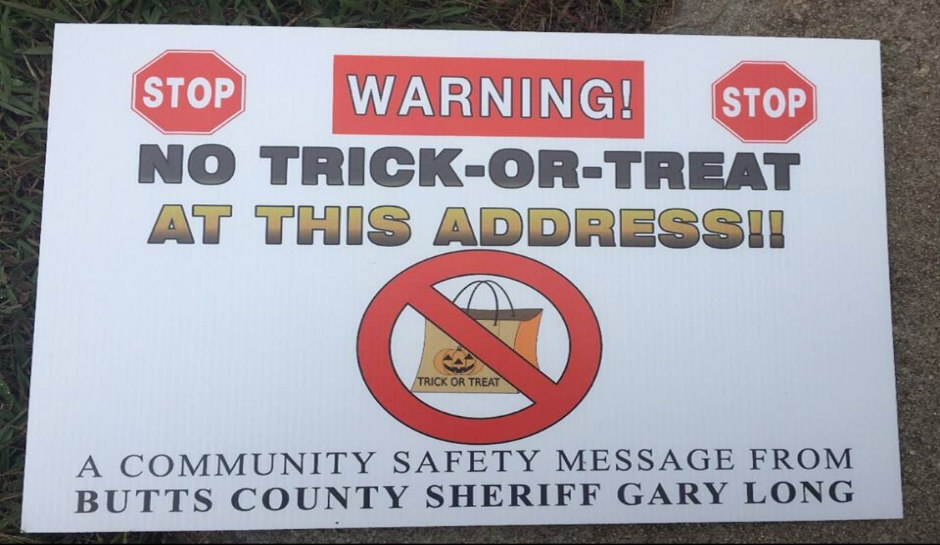 A group of convicted Georgia sex offenders filed a lawsuit against the Butts County sheriff in an attempt to stop “No Trick or Treat” signs from being placed in their yards.

The New York Times reports that according to the lawsuit, three sex offenders, Christopher Reed, Reginald Holden and Corey McClendon, were told by Butts County Sheriff Gary Long to display the signs in their yard or “face unspecified trouble.”

According to Long, the signs are in connection with Georgia state law that prohibits convicted sex offenders from participating in Halloween events involving children.

The plaintiffs said that during Halloween season last year, the sheriff trespassed onto their properties to place the signs. They’re arguing that their constitutional rights are being violated.

“I’m just not sure that this kind of action makes your kids any safer,” the plaintiffs’ lawyer, Mark Yurachek, said, according to FOX Atlanta. “It just makes your constitutional rights less safe…..The trespass stuff is pretty clear. They’re coming onto their property and putting the signs on there.”

Yurachek added that there is no Georgia law that requires sex offenders to displays signs in their yards.

The lawyer said that Georgia sex offenders are listed in the sex registry, but they have no legal obligation to inform neighbors or the public of their status.

Long plans to argue that his intentions are to keep children safe, according to Butts County SO Facebook post.

“This Thursday, we will argue to the Federal Court that we are protecting our children and following Georgia Law by placing these signs. Regardless of the Judge’s ruling this Thursday, I WILL do everything within the letter of the Law to protect the children of this Community.”

The hearing is scheduled for Thursday in Macon. Check back for updates.