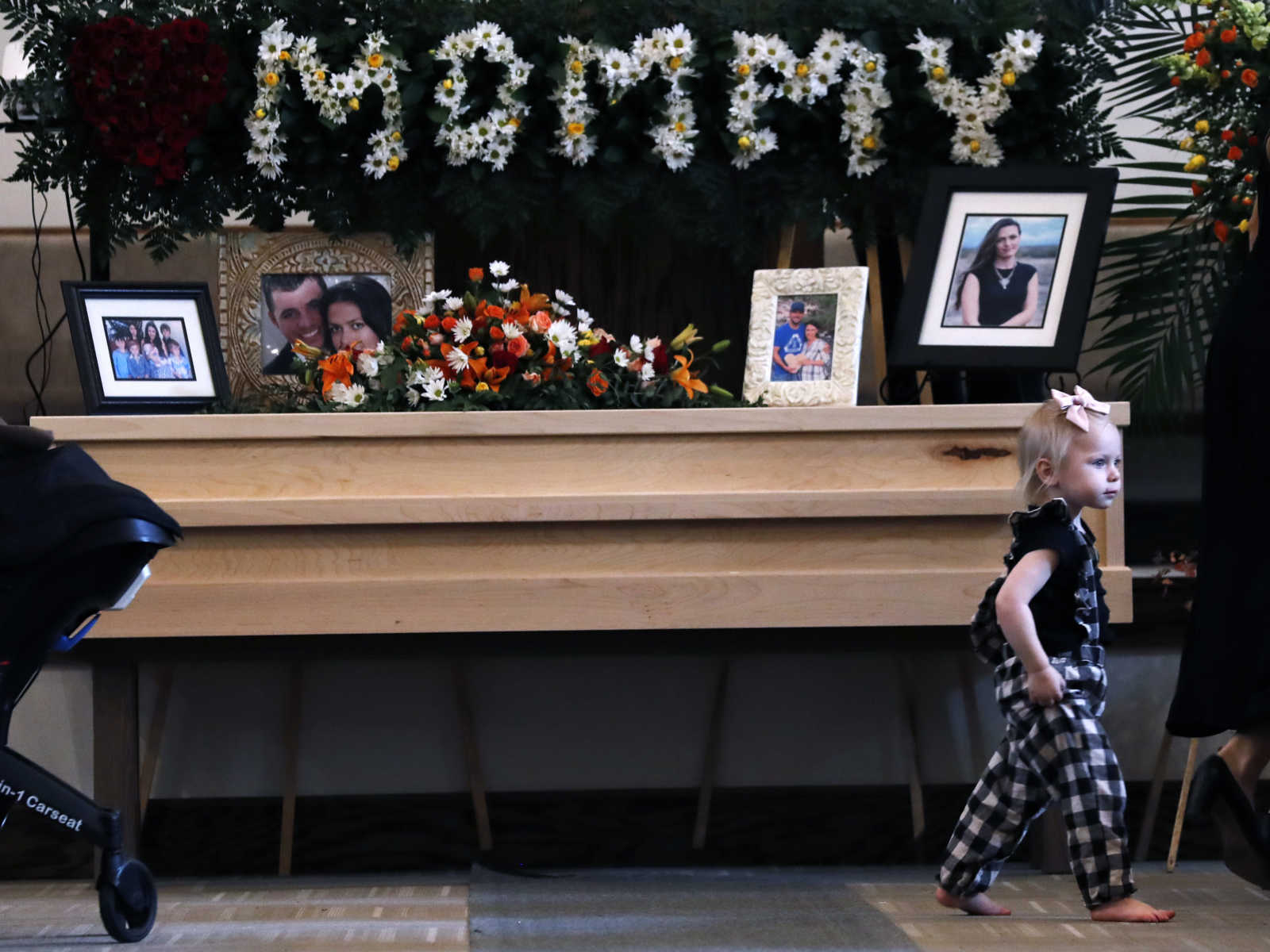 After witnessing his own mother gunned down in front of him, Devin Langford walked around 14 miles to find help for his family after they were ambushed in Mexico while traveling to a wedding.

Good Morning America reports that 13-year-old Devin was in a white Suburban with his mother and siblings when a group of armed men approached them and opened fire last week. The boy said his mother, identified as Dawna Langford, began to pray right before she was shot and killed.

The victims were part of a faith group who lived in Sonora, an established faith-based city in Mexico, around 70 miles from Douglas, Arizona.  The attack happened while they were driving to a wedding in LeBaron, Mexico.

According to police, the suspects ambushed the group and opened fire close to Rancho La Mora, which lies on the border of Sonora and Chihuahua. One of the vehicles burst into flames when bullets hit it, while Dawna’s SUV wouldn’t start back up.

Dawna tried frantically to get her vehicle started, then desperately screamed for her children to “get down right now,” before she was shot to death, Devin explained.

“They just started hitting [the] car first, like with a bunch, a bunch of bullets. Just start shooting rapidly at us. The car didn’t work. So she was just trying right there, starting the car as much as she could, but I’m pretty sure they shot something so the car wouldn’t even start.”

Two of Dawna’s children died with her, but Devin, one of the survivors, hid the other children under a tree before making the long trek to La Mora. It took him around six hours, but he eventually found help.

Devin said the other children initially accompanied him on the walk, but their infant brother had been shot and was bleeding profusely. His sister McKenzie had been shot in the foot. That’s when he decided to have the others wait for him to return.

“We walked a little while until we couldn’t carry them no more. And so we put them in the bushes so they wouldn’t get hit or nothing. So I started walking,” Devin said. “Every one of them were bleeding really bad. So I was trying to get in a rush to get there.”

Devin’s heroic feat saved the lives of eight children, and although he said he doesn’t feel like a hero, his father, David Langford, said that’s exactly what his son is.

“To be honest with you, my boy’s a hero simply because he gave his life for his brothers and sisters.”

As CrimeOnline previously reported, the victims were dual Mexican and U.S. citizens. They were trying to travel back to the U.S. when the attack happened.

Rhonita Maria LeBaron and her children, which included infant twins, an 8-year-old, and a 10-year-old, were traveling in one vehicle. All five victims died.

Around eight miles away, police found the SUV Devin had been traveling in with this family. The deceased victims were identified as:

The Salt Lake Tribune reports that one child was shot down while trying to run away. An infant, identified as 7-month-old Faith Marie Johnson, survived the incident, along with Devin’s 8-month-old brother, Brixon Oliver Langford, who was shot in the chest.

Devin’s sister, 14-year-old Kylie Evelyn Langford, who was shot in the foot. She attempted to find help when Devin hadn’t yet returned back. Authorities later found her safe.

Mckenzie Rayne Langford, 9, also survived the incident after a bullet grazed his arm. Cody Greyson Langford, 8, was reportedly shot in the jaw and leg. He’s in critical condition, according to family members.

Additional survivors include Xander Boe Langford, 4, who was shot in the back, and Jake Ryder Langford, 6, who was uninjured.

The victims were a part of the LeBaron family, a group that broke away from the Mormon community during the 1920s and moved to the state of Chihuahua, in Northern Mexico. They eventually settled in the plains and hills of the area, which became known as Colonia LeBaron or LeBaron, named after the faith group’s founder, Alma Dayer LeBaron.

Now, over 100 family members have moved back to the U.S. They said it’s not safe enough in Mexico to continue living there, despite the family’s long history in the area. However, this wasn’t the first time the family had violent run-ins with Mexican cartel members.

The Seattle Times reports that in 2009, the LeBaron community had been intertwined in a “dust devil of violence” after Mexico’s drug cartels targeted them. The outlet reports that one of the reasons the cartels zeroed in on the community had to do with the family’s supposed wealth.

During the same year, a leader of the colony and a vocal anti-violence activist, Benjamin LeBaron, 31, was taken from his home at gunpoint after he refused to pay $1 million for his teen brother, 17-year-old Erick LeBaron, who had been kidnapped and held at ransom.

The armed men allegedly threatened to rape Benjamin LeBaron’s wife in front of their children unless someone showed them where LeBaron kept his weapons arsenal.

“But he didn’t have any, because I promise you, if he did, he would have used them to protect his family,” Julian LeBaron said.

Within an hour, the kidnappers beat Benjamin LeBaron and shot him dead. LeBaron’s brother-in-law, Luis Widmar, was also taken at gunpoint after trying to help Benjamin. He, too, was shot and killed.

Afterward, the killers freed Erick LeBaron, possibly due to the large public outcry. Yet, they posted an ominous sign directed LeBaron family following Benjamin’s death, blaming them for the capture of 25 of the Sinaloa drug cartel members.

“This is for the leaders of LeBaron who didn’t believe and who still don’t believe.”

Authorities later said Jose Rodolfo Escajeda, “a lieutenant” in the of the Juarez cartel, was presumably responsible for Benjamin LeBaron and Luis Widmar’s deaths.

Debates Over Why it Happened

Mexican officials indicated that the family may have been attacked accidentally. Security Secretary Alfonso Durazo stated that one criminal group of cartel members may have mistaken the family’s vehicles for another group of criminals. It’s a theory that some of the family members do not buy.

“This was deliberate and intentional,” Rhonita Miller’s mother-in-law, Loretta Miller, 53, told Los Angeles Times. “We were the targets. We just don’t know why.”

Evidence indicated that the gunmen kept shooting, even after one the of mothers stepped out of her vehicle and showed the gunmen she had children in the vehicle with her.

Miller added that is was common for cartel members to set up roadblocks so that they could control who entered and left the area. She added that her family had to purchase their gasoline directly from the criminal group.

Although Miller can’t figure out why her family was targeted, Lafe Langford, a cousin of a few of the victims, told Reuters that they were used “as bait” to lure another cartel into a battle.

“We were deliberately targeted, used as bait to lure one cartel against another. They shot us up, burned our vehicles to send a smoke signal into the sky.”

Langford added that he thought the Juarez Cartel shot his family in an attempt to bring about a fight with the Sinaloa Cartel.

General Homero Mendoza, who previously claimed that the attack could have been a case of mistaken identity, reportedly admitted that the Juarez Cartel wanted the Sinaloa Cartel off of “their turf.”

Authorities continue to investigate the brutal massacre. Check back with CrimeOnline for updates.