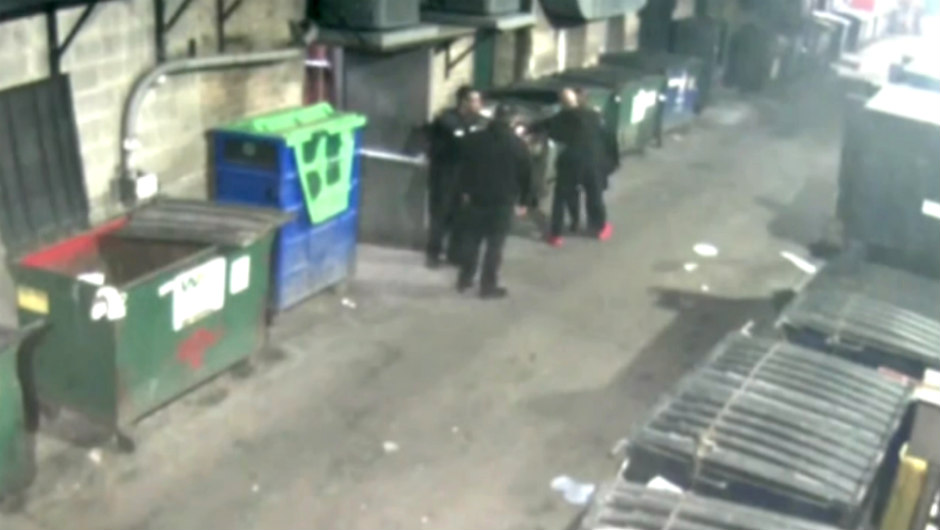 Another victim comes forward after disturbing video shows woman being raped behind restaurant, while security guards do nothing: Court Docs

Another woman says she too was sexually assaulted after visiting a  popular Chicago restaurant, following news that security footage caught a disturbing incident behind the same restaurant in October.

As CrimeOnline previously reported, an alleged sexual assault incident happened on October 23, at the El Hefe restaurant, located in the River North area of Chicago, off of Hubbard Street. A Florida woman who won a  getaway trip to Chicago ended up drugged and raped, and her attorneys allege that restaurant security guards stood by and didn’t help her.

The security footage, which was provided by another establishment near El Hefe, showed two security guards standing by the doorway of the restaurant, laughing and doing nothing while a man wearing red shoes pulled the victim beside a dumpster and raped her, the lawsuit claimed.

Lawyer Robert Fakhouri said that El Hefe employees tried to view the restaurant’s own security footage of the night in question, but it had apparently been deleted.

Last week, according to CBS Chicago, after Elizabeth Capra saw the viral security footage of the woman, she decided to break her silence after three years.

“I’m coming forward now, after seeing the video of Jane Doe, absolutely horrified by what happened to her,” Capra said. “I know it wasn’t an isolated incident, and I know that it’s happened to other women, and I can’t sit back and live with myself knowing that I’m not doing anything to stop it.”

Capra said she went to El Hefe with friends in October 2014 to watch a Chicago Bears game. She said after ordering one drink, she couldn’t remember anything afterward. She claimed she was certain that only the bartender working that night touched her drink that night.

“My two girlfriends, who were with me at the time, told me I started acting extremely, extremely out-of the ordinary, extremely intoxicated, very fast….I didn’t order a roofie.”

Her friends urged her to go to the restroom with them, but Capra said she declined. When her friends returned back to their seats, Capra was gone. Capra said the next thing she remembered was running home. Her family took her to a hospital, where a physician ordered a toxicology screening and a rape test kit.

Test results confirmed, according to Chapra, that she had been raped and drugged.

“I remember coming with my girlfriends. Ordering my drink. And that is it. It’s like a light turned off in my brain,” Capra told Inside Edition. “The next thing I remember is running to my home down the street where I was either dropped off, dumped, I have no idea.”

Capra added that her phone and wallet had also been stolen that night, and someone used her credit card, racking up thousands of dollars in purchases.

Since Capra and the other victim came forward, attorneys representing the woman said numerous others have reached out on social media, claiming the same thing happened to them.

Capra’s lawyer are now calling on Chicago’s mayor to investigate El Hefe, with the hopes of revoking the restaurant’s liquor license. Capra also filed a lawsuit against the restaurant as well.

Meanwhile, El Hefe denied knowing anything about the incidents.

“We’re working very closely with the Chicago Police Department because we want to know what happened and make sure it never happens again,” Lissa Druss, a spokesperson for El Hefe, told Inside Edition.