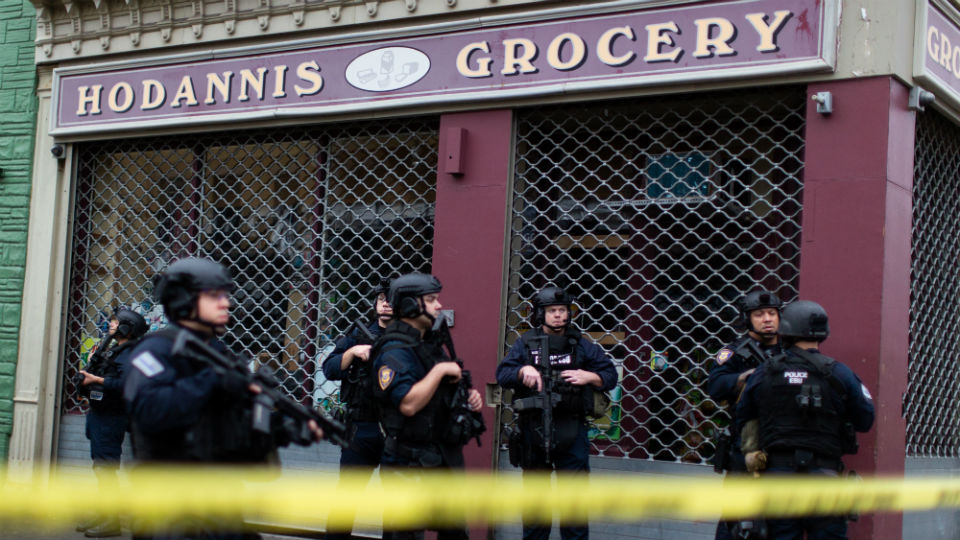 Six people, including a police officer, were killed in a violent shootout in Jersey City, New Jersey, on Tuesday, and officials appear to believe that a kosher grocery store may have been specifically targeted.

NBC News reports that Jersey City police Detective Joseph Seals, 39, was fatally shot in a cemetery Tuesday afternoon. He had reportedly been investigating a murder, and approached two individuals before one of them shot him. As CrimeOnline previously reported, the officer is believed to have been shot in the head.

After the officer was shot, the pair of suspects–described by sources to NBC News as a male and a female–drove in a U-haul van to a kosher grocery store. Surveillance video from the store reportedly shows the suspects immediately opening fire, killing one person before gunfire continued as officers responded.

According to multiple reports, including the Jewish Chronicle, one of the deceased victims is Leah Mindel Ferencz, 33, the wife of store owner Moshe Hirsch Ferencz, 24, who had briefly stepped out of the store before the shooting there began. The Jewish Telegraphic Agency reports that a witness in the store told Rabbi Shmully Levitin of New York City that he saw the store cashier, believed to be Ferencz, fall down injured, and saw another customer inside the store who was hurt.

The store owner’s mother, Victoria Ferencz, told the New York Times that her son had gone to a nearby synagogue, which was placed on lockdown after the shootout began.

Law enforcement sources told NBC News that the two suspects were killed, and police found additional victims inside the store.

Police have not yet revealed the identity or any further details about the suspects.

According to the NBC News report, Jersey City Mayor Steven Fulop said on Twitter Tuesday that the suspects are believed to have “targeted the location they attacked.”

Senior law enforcement officials told the news outlet that the store may have been targeted.

According to the New York Times, officials are treating the U-haul van as a third crime scene, in addition to the store and the cemetery, as the vehicle may have contained an explosive device.