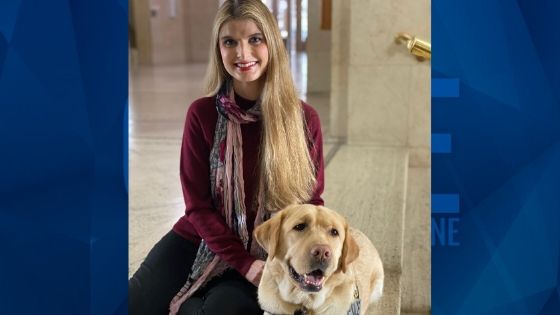 Alicia Kozakiewicz, who survived a horrific abduction as a child in 2002, met K9 Kozak on Tuesday. Kozak is “an electronic detection canine named in Alicia’s honor,” according to the Wisconsin Department of Justice.

On January 1, 2002, Scott Tyree, 38, lured Kozakiewicz, 13 at the time, from her family home after the pair met in a Yahoo chat room. Prior to the meeting, Tyree pretended for nearly a year to be a teen boy. Authorities said Tyree groomed Kozakiewicz and once he gained her trust, arranged to meet her.

Kozakiewicz met Tyree in Pennsylvania, but as soon as he had her in his car, he drove back to his home in Virginia. Tyree held Kozakiewicz hostage for four days while raping and torturing her.

As CrimeOnline previously reported, Kozakiewicz revealed that Tyree chained her up before raping her, then broadcast himself abusing her. Someone who watched the video recognized Kozakiewicz from a “Missing” poster and contacted authorities. The FBI found the teen while raiding Tyree’s home on January 4, 2003.

Tyree was eventually sentenced to 19 years and 7 months in prison.

Since her abduction, Kozakiewicz founded the Alicia Project, an advocacy group that raises awareness on Internet safety and provides resources and education on child online safety. She’s made numerous appearances across the nation where she has shared her story while advocating for child safety.

Attorney General Josh Kaul introduced Kozakiewicz to K9 Kozak, whose been trained to help police with investigations concerning the internet and children.

“K9 Kozak helps with the investigation of internet crimes against children by locating hidden electronic devices,” said Attorney General Kaul. “In naming him, DOJ wanted to honor Alicia, whose advocacy played a critical role in bringing Kozak to the DOJ team and has helped law enforcement get justice for survivors.”

Kozakiewicz said she was honored to meet Kozak. Together, she added, they will work to children safe.

“Alicia’s Law saves lives and helps to protect children from child predators. In an investigation, a case is only as strong as its evidence. This evidence can now be hidden on very tiny electronic storage devices. Today, I am so honored to finally meet my namesake, K9 Kozak, who has been specifically trained to locate this evidence,” said Alicia Kozakiewicz.

“Together, we work to keep Wisconsin’s children safe!”

For the latest true crime and justice news, subscribe to the ‘Crime Stories with Nancy Grace’ podcast. Listen as Kozakiewicz joins Nancy Grace on a related episode.