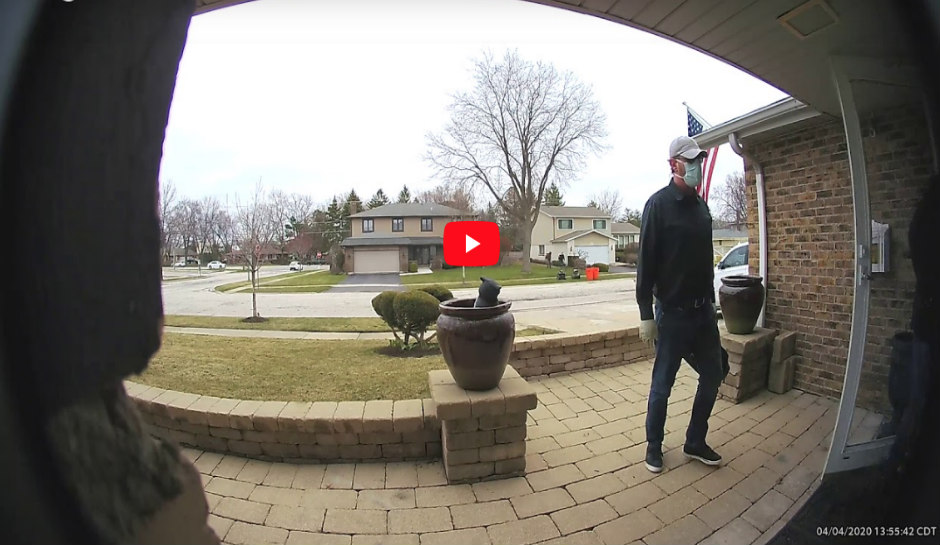 A deadly Illinois home invasion was caught on camera after two men wearing surgical masks attempted to break into an Arlington Heights Home.

The Daily Herald reports that the incident happened at a home off of North Evergreen Avenue on Saturday afternoon, a little before 2 p.m. Two male suspects wearing gloves and surgical masks approached a door, according to police, and when the homeowner opened the door, both suspects walked inside.

A struggle caught off-camera broke out. Afterward, the security camera showed the homeowner pushing one of the men outside, where he began beating him. The suspect escaped and fled down the street.

Authorities charged oned of the suspects, identified as Bradley J. Finnan, 39, with home invasion and murder, after his accomplice, Larry D. Brodacz, 58, was shot and killed by the homeowner inside the residence.

Investigators determined that the homeowner acted in self-defense.

According to prosecutors, the suspects hoped to find $200,000 cash inside the home. Finnan told police he saw a box of cash in the home around 20 years ago and thought the cash was still in the house.

Finnan, who allegedly brought a blowtorch and zip ties with him, spotted the security camera as they approached the home and instructed Brodacz not to look at it.

The homeowner later explained he opened the door thinking landscapers had arrived. Once the suspects forced their way into the house, his wife screamed and fled upstairs with their children.

Brodacz allegedly followed her and pushed through a door where she was hiding with the children. He pointed a gun at her as she pleaded with him to not shoot.

Meanwhile, the homeowner fought off Finnan, then retrieved his own gun and confronted Brodacz. A fight ensued and Brodacz approached him with a knife. The homeowner then shot and killed him.

When police arrived, the homeowner was bleeding from the head.

On Sunday, police identified Brodacz as the person in a missing person flyer. On the same day, they located Finnan at his mother’s house. Security footage from a gas station, where Finnan was reportedly seen removing trash bags from a car, helped identify him.

If convicted, Finnan faces the possibility of life in prison. Check back for updates.