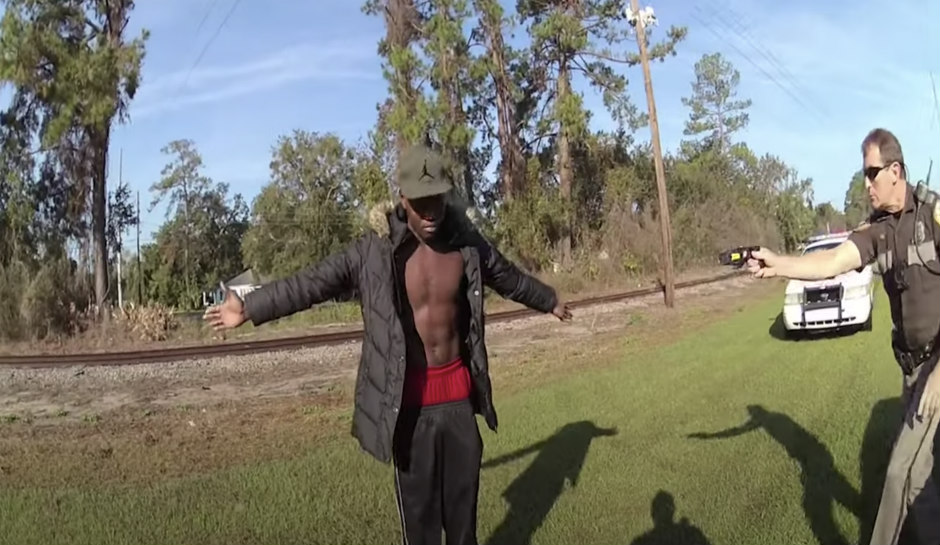 The video, first obtained by The Guardian, showed Glynn County police officer David Haney pointing a Taser at Arbery in 2017 because Arbery “wasn’t moving fast enough” and had a “big, heavy coat on.”

When the Taser malfunctioned, Officer Haney yelled for Arbery to get “down.” As Arbery complied, Officer Michael Kanago, who arrived first, explained to Haney that he had already searched the unarmed Arbery for weapons.

“I’ve got one day off a week. I’m trying to chill on my day off, bro,” Arbery tells the officers while kneeling. “I’m up early in the morning trying to chill.”

Prior to Kanago’s arrival, according to AJC, Arbery was sitting alone in his car, rapping over an instrumental track coming from his car stereo on November 7, 2017, when Officer Kanago approached him. Arbery showed the officer his identification but appeared upset at being questioned after he said he didn’t do anything wrong.

Kanago: “I’ll tell you why I’m here, man. Because this area is known for drug activity.”

Kanago then proceeded to check Arbery for weapons.

The officers eventually let Arbery leave but kept his car because his license was suspended. The officers later wrote that they detected a light marijuana smell coming from his car.

Officer Kanago wrote that “veins were popping from [Arbery’s] chest, which made me feel that he was becoming enraged and may turn physically violent towards me,” The Guardian reports.

No charges were filed.

Attorneys for the Arbery family told The Guardian that the video clearly showed  “a situation where Ahmaud was harassed by Glynn county police officers”.

As CrimeOnline previously reported, retired district attorney investigator Gregory McMichael and his son, Travis McMichael, allegedly followed Arbery in their truck for several minutes, around a Satilla Shores neighborhood in Brunswick on February 23, 2020.

After circling around a block, McMichael and his son stopped their truck on a residential road and waited for Arbery. As Arbery approached and ran around the truck, a scuffle broke out. Travis McMichael, who had gotten out of the truck with a shotgun, began fighting with Arbery.

Gregory McMichael remained in the bed of the truck, armed with a .357 Magnum. Another person, identified as William “Roddie” Bryan, parked his car behind the suspects’ truck and recorded with his phone as Arbery fell to the ground after getting shot twice in the chest by Travis McMichael’s shotgun.

Bryan has not been arrested or charged in the incident.

Gregory McMichael would later tell investigators that they brought guns because they thought Arbery was armed, although an investigation determined that Arbery was unarmed at the time of the incident.

Almost three months after the deadly shooting, the father and son were arrested and charged with murder and aggravated assault, following an investigation by the Georgia Bureau of Investigation. The suspects purportedly said they were attempting to make a citizen’s arrest when Arbery was killed.

The McMichaels remain behind bars without bond.