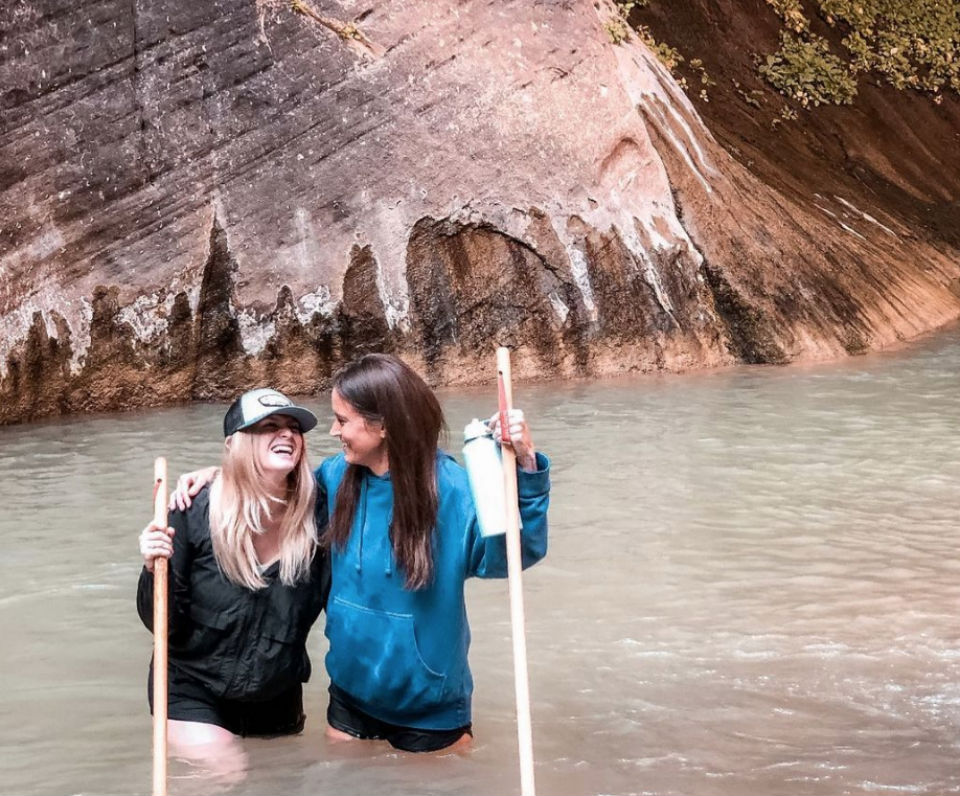 “It’s just so blown out of proportion,” Courtier’s sister said

The sister of a woman who was rescued after nearly two weeks missing in Utah’s Zion National Park has clarified earlier statements made by Holly Suzanne Courtier’s family.

Courtier, 38, was seen  arriving via private shuttle to a parking area near trailheads on October 6, but did not appear for the return trip later in the day, ABC 4 News reported. And as Today.com reports, she was reported missing two days later on October 8.

On Sunday, 12 days after she was last seen, Courtier was rescued after witnesses in the park spotted her and contacted authorities. As previously reported, the California resident did not have her cell phone with her. It remains unclear if Courtier knew she was the focus of a major search, though several people claiming to have been in the park during the time she was missing have commented on social media about seeing the missing persons signs.

Courtier’s 19-year daughter told CNN on Monday that her mother had hit her head on a tree not long after she arrived to Zion National Park, and was too weak and disoriented to seek help.

“She was very disoriented as a result and thankfully ended up near a water source — a river bed,” Courtier’s daughter told the new station. “She thought her best chance of survival was to stay next to a water source.”

Courtier was near the Virgin River when she was rescued on Sunday. According to multiple reports, she did not tell her family she was going to the national park, and her sister Jamie Strong told CBS News that she had not intended to be away for long.

Courtier’s family has continued to insist she was in severely malnourished and dehydrated when she was found, though a park official told Fox News that Courtier left the park largely on her own with “minimal assistance” when she was released to family members.

“It’s just so blown out of proportion,” Strong told Today.com. “When you think you’re going to die and you see a ranger, she said she literally got like giddy inside because she knew she was going to see her daughter and her family, so you definitely have some adrenaline working for you at that point.”

Strong also said that Courtier chose to leave the park with her family, as she was scared and traumatized from the ideal. The family immediately brought her to an emergency room, she said.

On Wednesday, Sgt. Darrell Cashin of the Washington County Sheriff’s Search and Rescue team, which played a minor role in the search for Courtier, told ABC 4 News that the Virgin River is an unsafe water source, due to high levels of toxic algae. A message on the Zion National Park’s website warns visitors not to drink the water.

“If she had been drinking that water, unless she had some really high immune system, she would’ve been very, very ill and probably unable to come out on her own,” Cashin told ABC News. “She either took a lot of water with her or had another clean water source that was near here, but the Virgin River is not that source.”

Courtier’s sister Jamie Strong told Today.com on Friday that Courtier did not drink water from the Virgin River.

“She said she didn’t have anything to drink at all,” Strong said, explaining that the dehydrated woman had taken river water only to wet her lips and mouth and then spit it back out. “She was very well aware of the toxins in the river. There was a statement made that she said she set up camp because she wanted to stay close to the river, but we were never implying that she drank the water.”

According to all available information, the search for Courtier began on October 8, the same day her family reported her missing, and two days after she arrived to the park, reportedly missing her return trip on a private shuttle.

While the park-provided shuttle services require a reservation only on the trip into the park, and not the return trip, sources with knowledge of tourism operations told CrimeOnline that visitors often use private shuttles, especially in recent months when the park shuttles are running at reduced capacity due to the coronavirus pandemic. The private companies are likely to require travelers to purchase a same-day return ticket with designated departure times for both arriving and returning shuttles.

Cheri McRae of Zion Jeep Tours told CrimeOnline that the National Park Service sent a letter to transportation operators with commercial permits, alerting them to the hiker’s disappearance. The company double-checked the manifests and confirmed that Courtier had not traveled on one of their shuttles. McRae said that if a visitor fails to meet their return shuttle, a company representative will attempt to reach them to ensure they got out of the park safely. McRae also noted that it is not uncommon for visitors to use multiple shuttle services, even if they purchase a round-trip ticket on one, and that visitors will sometimes hike out of the park. A failure to appear for a return shuttle would not necessarily be cause for alarm, she said.

CrimeOnline has not yet identified the shuttle service that Courtier used to reach the hiking trails.

Courtier’s sister told Today.com that Courtier had not been in a good state of mind when she left for the national park, and has since checked herself into a mental wellness center.

“I don’t think that her mental state was good when she went into the park,” Strong said. “I really think she had a mental breakdown and was not in the right state of mind when she decided to take this journey and not tell people where she was going.

“I think God got her through this,” Strong continued. “I think it’s a miracle. I truly believe there is no reason she should be alive.”