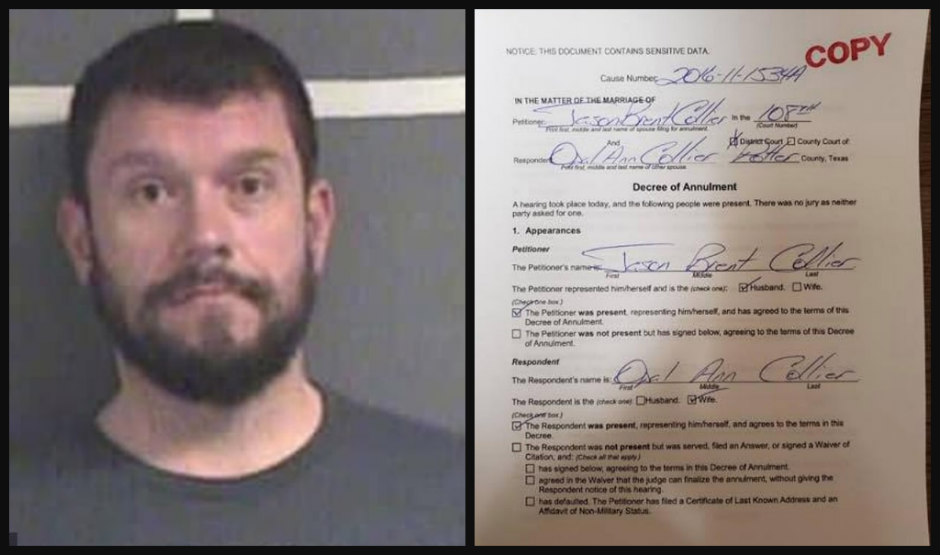 A Texas woman is speaking out after she reportedly caught her now ex in numerous lies and uncovered he was a married father with children.

As CrimeOnline previously reported, Texas Rangers arrested Jason Collier on Thursday, a day after he was placed on administrative leave. According to authorities, Collier is accused of tampering with a government document that indicated his marriage had been annulled.

The incident started when Cecily Steinmetz, of El Paso, took to Facebook to air out Collier’s alleged dirty laundry. She posted photos of the marriage annulment documentation that Collier allegedly sent her.

When Kristi Shaffer saw the photos and posts, she, too, said she was involved romantically with Collier, according to The Daily Beast. Shortly after, Collier reportedly deleted his own Facebook account.

Steinmetz told MyHighPlains.com that Collier took time off from his job as a police chief to spend time with her, with promises to get married. Collier told her he would provide proof to show that his marriage was annulled.

Speaking about the annulment, 108th District judge Doug Woodburn confirmed that “no match exists either under that name or cause number. Our cause numbers are completely different… My court is followed by the letter E. It’s a fake.”

Cecily Steinmetz said it all started with a picture, when she was ready and happy to make her relationship official by sharing it to her family and friends on Facebook.

During an interview with MailOnline, Steinmetz explained how she met Collier and how she ultimately found out he had a wife and several women on the side.

“I met Jason on a dating app in mid- December, our profiles matched each other and one day I received a ‘like’ from him. I responded back and we chatted via the web a few times. He told me he worked in law enforcement but wasn’t really specific about it.”

After connecting with Collier, Steinmetz said there was an instant, comfortable bond, and knowing that he was a police chief put her at ease. He reportedly told her that if she saw an article about him in a newspaper claiming he was married, to “ignore it, that it was incorrect and he’s contacted the news organization who wrote the article to change it but haven’t as of yet.”

The pair eventually decided to be exclusive, Steinmetz added, after meeting for dinner several times. The relationship started to unravel when Steinmetz posted a photo of herself and Collier on Facebook. One of her friends was also friends with Steinmetz’s wife, Opal.

“After I posted the picture of us on Facebook things kind of hit the fan. The next morning, (Tuesday, January 19th) a friend of mine texted me asking for his name. I told her his name and she said he looked very familiar. But I reassured my friend I already knew about his ex-wife’s name and had checked him out.

“But within minutes my friend started to bombard me with multiple screenshots of his wedding, with a woman who was not the ‘wife’ he told me of. She sent me a post where Jason wished his wife, happy anniversary in September 2020.”

Around this same time is when Collier sent Steinmetz proof of annulment. When a county clerk called Steinmetz back, however, she learned that the annulment documents were fraudulent.

“There weren’t any records, but I asked if the record could be sealed or something, which the clerk said there was a possibility but not probable,” Steinmetz said.

Later, the pair spent the weekend together, according to Steinmetz, who said he was lacking in his skills in the bedroom, but she looked past it because she thought she loved him. She added that Collier talked non-stop about getting married during the weekend getaway.

“During the entire weekend Jason was talking about marriage, by the end of the weekend together I was more than willing to marry the guy. He told me I was a blessing, that I’m the answer to his prayers, how he’s never met anyone like me and he’s waited his entire lifetime to meet someone like me. He showered me with compliments.”

Afterward, Collier began pulling back, Steinmetz said. He began citing differences between the two and claiming that he needed his space.

“I was devastated, hours earlier he told me he wanted to spend the rest of his life with me and now he wants to put the brakes on our relationship.”

After bouts of arguments, Steinmetz broke things off and decided to move on. Around the same time, Steinmetz’s friend saw a photo of Shaffer with Collier.

“I quickly message Kristi and within 20 minutes she called me and we both realized we’ve been played by the same man,” Steinmetz said. “We compared notes, dates, times, etc.”

Soon after, Steinmetz took to Facebook to call Collier out. Afterward, several other women came forward, claiming that they also dated Collier.

“I soon found out I was dating a married man. I was sickened by it. I wanted everyone to know this man is a cheater so I posted about him on the Stinnett Police Department Facebook page and it went viral…I’ve been contacted by several women, there are at least eight of us that I know of. I want everyone out there to know this man is a liar and cheater,” Steinmetz said.

After her viral post, Steinmetz met up with a Texas Ranger who asked about her relationship with Collier and had her sign a sworn statement.

Collier has been charged with tampering with a government document with the intent to defraud. His bond was set at $10,000. His wife has since reportedly filed for divorce.

“I would just hope that he has learned his lesson, not to deceive people like that,” Steinmetz added. “I was also apt to believe him about everything due to his position.”