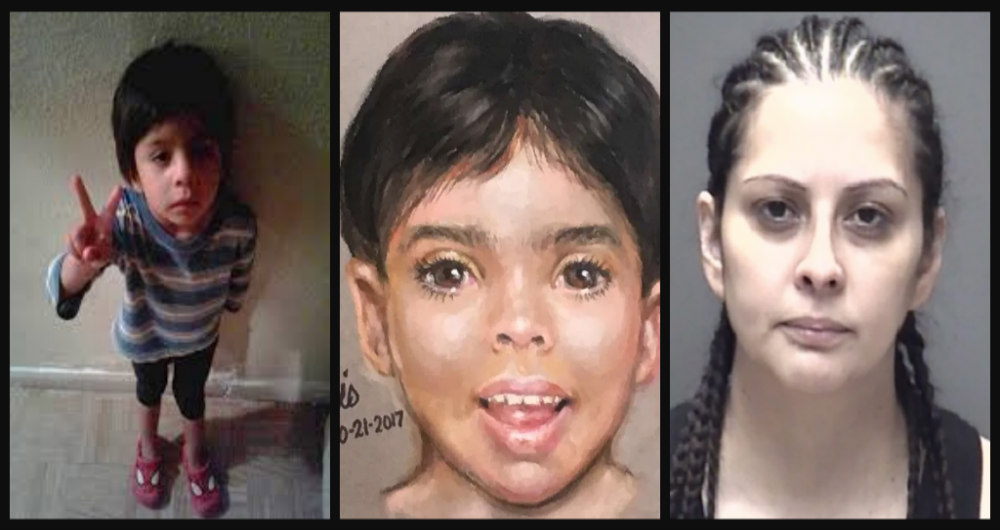 ‘Little Jacob’: Jury returns verdict within an hour after mother beats boy, tosses his dead body into the ocean

It took a Texas jury only one hour to return a verdict against a mother who dumped her young son in an ocean and failed to come forward when authorities found him.

ABC 13 reports that 37-year-old Rebecca Suzanne Rivera has been sentenced to life in prison, in connection with the murder of her son, 3-year-old Jayden Alexander Lopez. Jayden was nicknamed  “Little Jacob” by authorities in 2017 while they were trying to identify the boy.

AsCrimeOnline previously reported, Galveston police found Jayden found washed ashore on a Galveston beach on October 18, 2017, after a passerby spotted the child’s body at around 5:30 p.m., in a remote area by the 700 block of Seawall Blvd.

Initially, authorities released a composite sketch of the little boy, drawn by forensic artist Lois Gibson. The sketch depicted what the child likely looked like while alive. For months, no one contacted police to claim the child. The tips that came in didn’t lead the child’s parents or caregivers, which at the time, frustrated investigators working the case.

In January 2018, in an attempt to bring leads into the case, investigators made a controversial move and released the actual crime scene photo of the boy. Hundred of tips flooded in, but two of the tips led authorities to Rivera, who lived in Houston with her girlfriend, Dania Sarai Amezquita Gomez, 31, at the time of Jayden’s death.

Rivera admitted that she never reported her son missing. According to trial evidence, Rivera and her girlfriend brought Jayden’s body to Galveston after he passed away in their home from abuse and neglect.

Rivera and Gomez are said to have dumped Jayden’s body in the water off of East Beach. His body was discovered the following day.

Investigators said the boy’s body showed evidence of scarring from beatings, specifically with hangers. Rivera admitted that she would take her anger out on Jayden and beat him with “anything she could find when she became frustrated” with her girlfriend.

Evidence showed Jayden had also been burned with cigarettes and suffered numerous blunt force trauma injuries. He also had ligature marks around his ankles and wrists, and a broken thigh bone.

“This was an appalling crime that made our hearts heavy,” Bryan Gaines, a senior resident agent at the FBI office in Texas City, previously said.

“No one reported Jayden as missing. No one was looking for Jayden. Jayden had no advocate other than us. Somebody took a beautiful, innocent child and discarded him in the ocean like he was a piece of trash.”

Gomez, who was charged with causing serious injury to a child, took a plea deal and agreed to testify against Rivera. She’s scheduled for a plea hearing on February 11.

Meanwhile, Rivera, who pleaded not guilty, has since filed a notice to appeal her conviction and sentence.

Rivera will be eligible for parole after serving 30 years in prison.