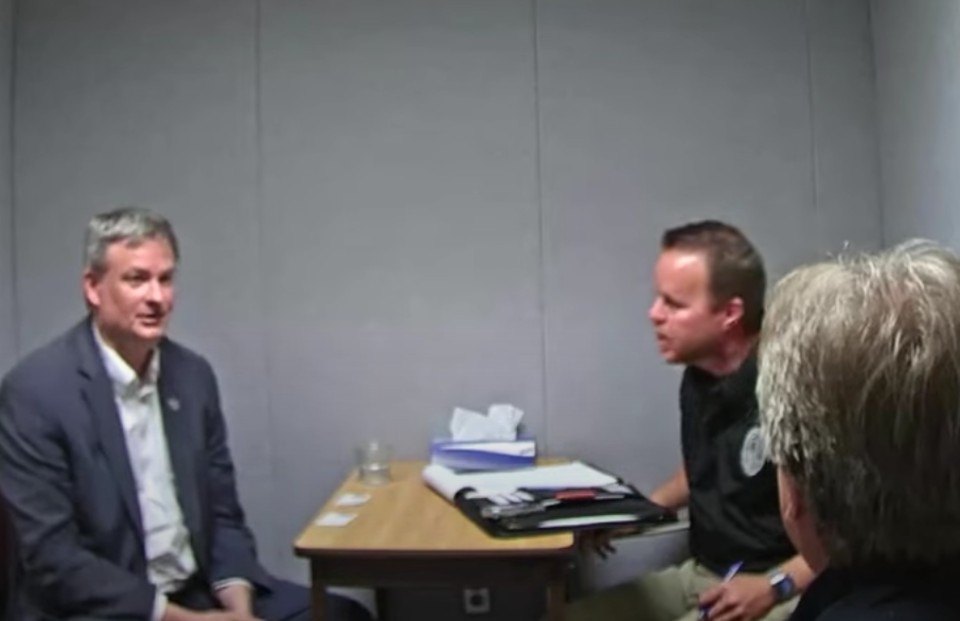 “His face was in your windshield, Jason. Think about that.”

Authorities in South Dakota have released interrogation footage showing that detective were dubious of Attorney General Jason Ravnsborg’s claim that he did not know what he had hit the night he killed a pedestrian on his drive home from a fundraising dinner in September.

As CrimeOnline previously reported, Ravnsborg called 911 after he hit Joe Boever on the night of September 12. Boever’s truck had been damaged in a minor one-car collision earlier that day, and he walked back to the vehicle that Saturday night — for reasons that may never been known, as Boever had made plans with a relative to go back for the disabled truck the next morning.

In the 911 call, Boever said that he thought he might have hit a deer. Hyde County Sheriff Mike Vole came to the scene, and reportedly searched the area with Ravnsborg for what the attorney general had hit, but did not find anything. The sheriff then lent Ravnsborg his personal vehicle to drive home so the attorney general would not have to wait for a tow truck. The next morning, Ravnsborg came upon the  scene on the way to return the sheriff’s vehicle and found Boever’s body. It remains unknown if Boever was killed instantly or if he might have survived if he had received medical help.

As USA Today reports, the South Dakota department of public safety released video of agents from the North Dakota Bureau of Criminal Investigation interviewing Ravnsborg on September 30, just over two weeks after the September 12 fatal incident. During the interview, the detectives reveal a damning piece of evidence that casts doubt on Ravnsborg’s claim that he did not realize he had hit a person: Boever’s eye glasses were found inside Ravnsborg’s car.

“His face was in your windshield, Jason. Think about that,” a detective says in the video.

“We know his face came through your windshield.”

Ravnsborg reportedly denied ever seeing the glasses in his car, though he said he did notice broken windshield shards on the front seat when he went into his glove compartment to get the registration after she sheriff arrived. The attorney general insisted that he was not distracted by his phone at the moment of impact.

“Quite frankly, ‘wham’ the incident happened,” Ravnsborg said in the interview, clapping his hands together when he said ‘wham.’

But investigators reportedly accessed cell phone data that suggests Ravnsborg was in fact using his phone around the time of the collision. According to USA Today, the investigators told Jason the data showed that he accessed a Yahoo! email account at 10:20, four minutes before he called 911, and visited another news website about two minutes later.

“So when we look at that, our concern is everything we are seeing here is it’s appearing you were on your phone reading political stuff at the time,” an investigator said. “People make mistakes. We’re thinking you made one.”

Ravnsborg reportedly denied using his cell phone right before the crash, claiming that he last remembers turning off the car radio and checking the speedometer before impact.

During the interviews, the detectives also questioned how Ravnsborg missed seeing the body on the night of the collision, as he claimed to have searched the area using his cell phone flashlight. The detectives noted that Boever had been carrying a flashlight as well, and it was still on when emergency responders arrived to the scene the next morning.

As previously reported, Ravnsborg claimed he did not have anything to drink at the fundraiser dinner, and a toxicology analysis did not find drugs or alcohol in his system — though the attorney general did not provide a blood sample until the afternoon the day after the crash.

Ravnsborg has been charged with careless driving, operating a vehicle while using a mobile or electronic device, and a lane driving violation for driving outside of his lane. Each count carries a maximum $500 fine and 30 days in jail. As CrimeOnline previously reported, prosecutors said they did not have enough evidence to meet the burden for reckless driving.