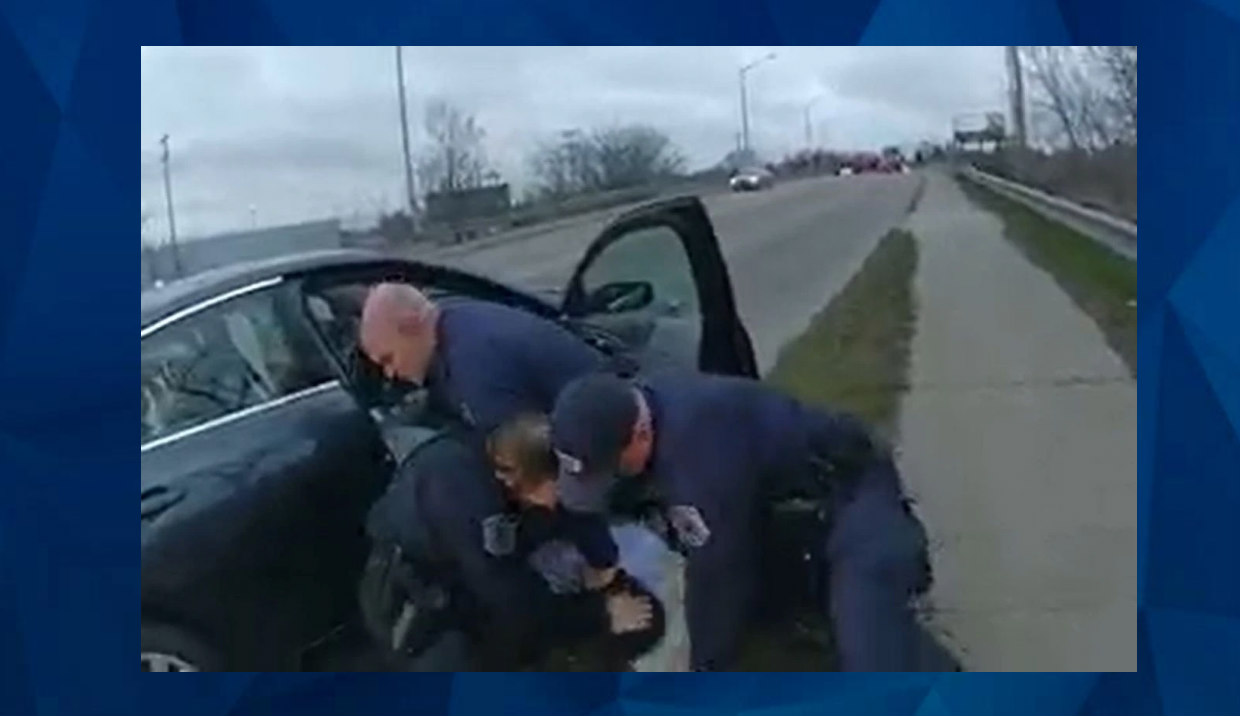 ‘Lucky you’re not dead’: Video shows cop repeatedly hitting male in the face during traffic stop for littering [SEE IT]

A Grand Rapids, Michigan, police officer is under fire on social media after bodycam footage was released by a civil rights lawyer.

According to TMZ, the incident happened on March 24, when Grand Rapids PD officers pulled over a car driven by Diabate Hood. Numerous squad cars surrounded Hood’s vehicle as a Black passenger and a Latino passenger got out of the car at the officers’ request.

Fox 40 reports that Hood identified himself and handed over his driver’s license, but balked when the officers told him to get out of the vehicle.

“I didn’t do nothing, Hood said. “Step out the car for what?”

Hood then crawled over to the passenger seat and it appeared that he attempted to flee from the passenger’s side. Several officers swarmed him and pinned him on the ground. One of the officers is seen delivering blows to Hood’s face repeatedly.

When Hood asked why he was pulled over, an officer replied, “littering!”

The suspect was subsequently arrested for attempting to disarm a police officer and resisting arrest. He’s also facing a weapons charge after the officers found guns inside the car. The two passengers were also arrested on felony charges.

Lawyer Tyrone Bynum, an attorney representing Hood, said that the officers shouldn’t have asked any of the suspects to get out of the car.

“You don’t have to listen to me, look at the video,” Bynum said.

“What I saw in the video was another George Floyd. My point is why are we to this point anyway? This is a felony-type stop. Why are we asking these guys to get out of the vehicle? Why are we handcuffing them?”

The Grand Rapids Police Department told Wood-TV that “supervisors and members of the department’s Training Unit” reviewed the body cam footage and declined to start an investigation.

“This is the police work that I expect from my personnel,” GRPD Chief Eric Payne said Wednesday. “I have made the enforcement of violent crime and the recovery of illegal firearms one of the department’s top priorities.”

Bynum disagreed, pointing out that one of the officers said Hood was “lucky you’re not dead,” after the alleged attack.

“For that to be a statement made in the heat of the moment, that was an honest statement and an honest belief of an officer that believed that was a possibility,” Bynum said. “I mean actually stated, he actually said, ‘You’re lucky.’”