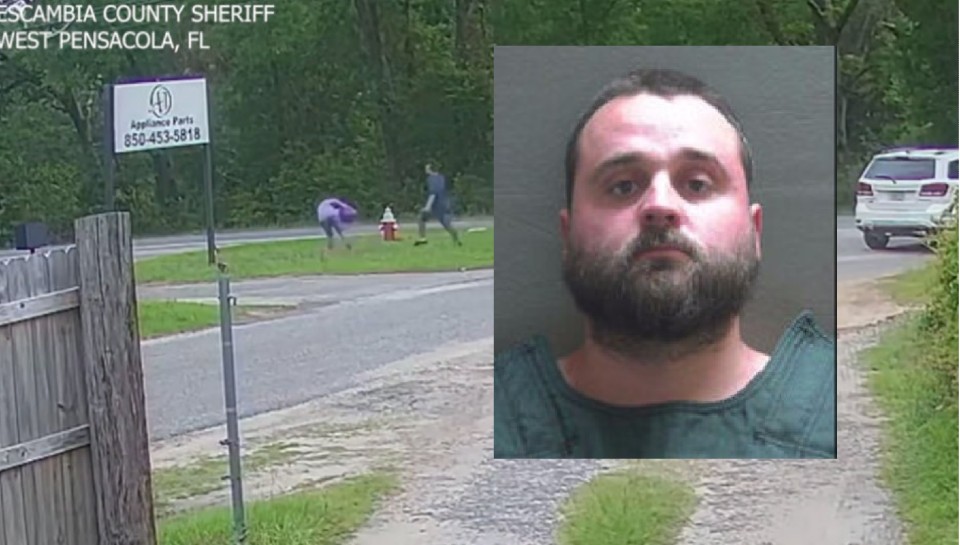 Suspect caught on video trying to snatch 11-year-old girl at knifepoint was late to work on day of abduction attempt, had secret phone calls with wife: Report

The man accused of trying to kidnap an 11-year-old girl at her bus stop in Pensacola, Florida, appeared in court on Wednesday, when a judge ordered 30-year-old Jared Stenga held on $1.5 million bond.

As CrimeOnline previously reported, police believe Stenga is the man captured on surveillance video Tuesday morning, snatching 11-year-old Alyssa Bonal, who successfully fought him off and escaped. Bonal said that he was holding a knife, but it does not appear she was injured in the terrifying incident.

As the Pensacola News Journal reports, Stenga’s co-workers told reportedly told police that Stenga showed up to work late on Tuesday; reportedly calling his supervisor just after 7 a.m.–and minutes after he tried to kidnap Bonal–saying that he was going to be late. The report does not specify exactly what kind of work Stenga does. Stenga reportedly appeared to a work site at about 7:45 a.m. Tuesday, and coworkers noticed he was behaving unusually, according to police documents obtained by the newspaper. The supervisor reportedly said that Stenga told him he was late because he had to take his child to school, but Stenga’s child attends school remotely.

Co-workers reportedly told police that Stenga parked his vehicle behind a barn at the job site, and took calls from his wife privately, which they said was unusual.

It is unclear what time Stenga left work. He was arrested at home at about 5 p.m. that Tuesday. Police reportedly used the surveillance image from the scene of the attempted kidnapping and a store where he made a purchase using a rewards card, which required the use of his phone number. When police arrived at the residence, Stenga’s car had been freshly painted. It is unclear when or how the repainting happened. Police also noticed that Stenga had blue slime on his arm. Bonal had been playing with blue slime while she was waiting for the bus, and told her mother that she intentionally got some of the substance on the suspect, using what she had seen on Law & Order about leaving evidence behind.

Arguing for reduced bail, Stenga’s attorney reportedly said in court on Wednesday that Bonal was not able to pick Stenga out of a lineup, while a prosecutor said that Stenga has a previous child neglect conviction which included allegations of a sexual nature. It is unclear if the victim was Stenga’s own child or another child.

Stenga has been charged with attempted kidnapping, aggravated assault and battery.