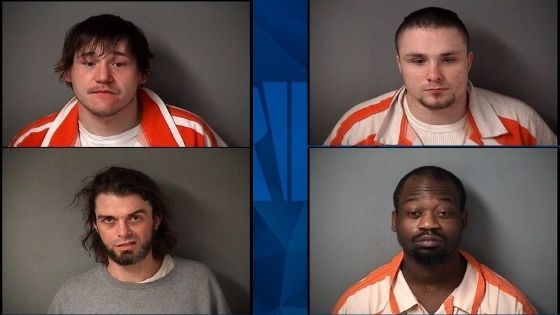 Police are continuing to search for the four inmates who escaped Fulton County Jail in Illinois on Wednesday, and have shared photos of the escapees.

One of the escaped inmates, 23-year-old Eugene M. Roets, was awaiting transfer to another facility at the time of the jail break, the Journal News reports. Roets was to being sent a 7-year prison sentence for several convictions involving assault and theft. It is not clear from the report if his impending transfer was a part of the escape plan.

Two of the other inmates who escaped were in jail on bond, according to the report.

Anyone who sees the escaped prisons is cautioned not to approach them, and they are believed to be armed. Instead, the Fulton County Sheriff’s Office has said to call police immediately.

Police in Illinois are searching for four inmates who escaped a prison in Western Illinois.

As CBS Chicago reports, the Fulton County Sheriff has issued a shelter-in-place order for residents of Lewistown after the inmates escaped from Fulton County Jail on Wednesday night.

According to the report, correctional officers discovered the inmates missing from a cell block, and later determined the prisoners had escaped the facility. The report does not indicate how the four prisoners escaped or exactly when.

The escaped prisoners have been identified as  Eugene Roets ,Jesse Davis, Cody Villalobos, and Zachary Hart. They are reportedly considered armed and dangerous.