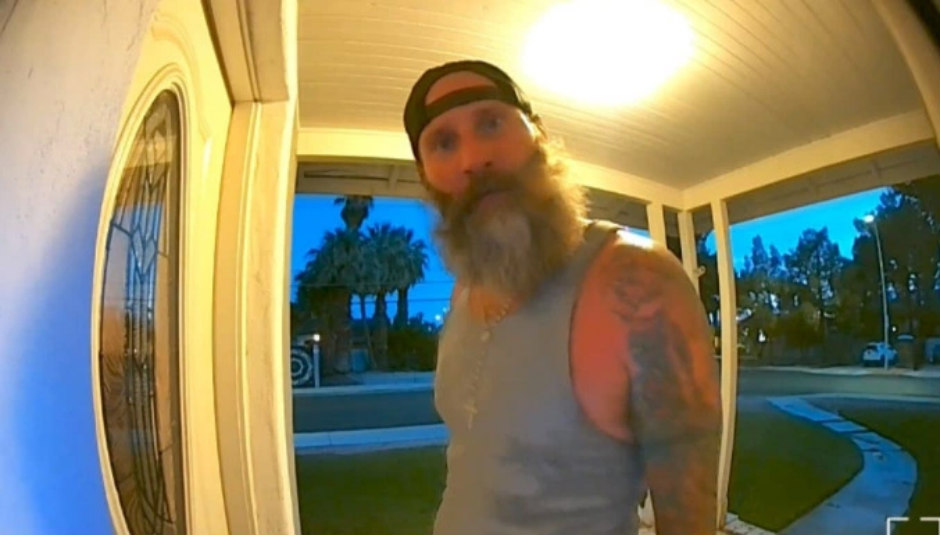 SEE IT: Man Caught On Ring Cam Threatening to ‘Rape and Kill’ Woman Inside

A Las Vegas man is behind bars after he threatened to rape and kill a woman in a bizarre incident caught on Ring cam.

Las Vegas resident Amanda Nowak was by herself at home Wednesday evening when the unknown man knocked on her door told her he had “a couple of questions” for her.

“Are you sure? Are you positive? I just have a few questions for you,” the stranger asked, according to VICE.

Nowak didn’t respond. Instead, she hid out of view and called 911. Nowak’s husband wasn’t home but he accessed the intercom remotely and asked the man what he wanted.

“What I’m looking for is the girl in the house cause I’m going to rape her and kill her. Can you have her open the door?” the stranger said.

The suspect then announced calmly that he had a knife and gun in his possession before walking away.

Nowak took to social media later and announced that police apprehended the man.

“One a personal note, the power of community using social media is strong and this proves so! Thank you everyone! I’m just glad he’s off the streets, and can’t harm anyone else. I do not wish to further comment,” Nowak said.

Las Vegas authorities have not released the suspect’s name but confirmed that he was arrested and charged with aggravated stalking, coercion, and obstructing a public officer. Authorities are expected to provide additional details as the investigation continues.