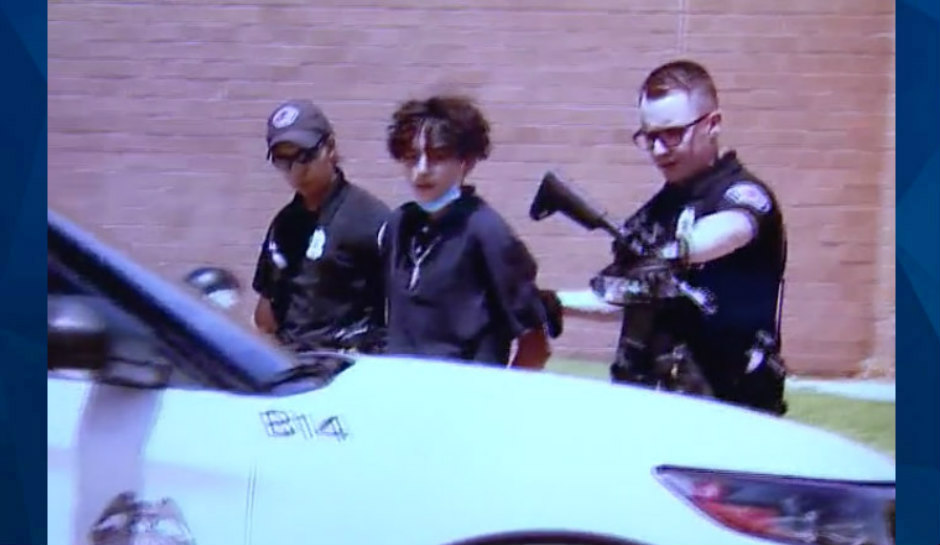 A New Mexico boy accused of killing a fellow classmate will remain behind bars, a judge ruled Tuesday, despite his lawyer arguing that his home life and mental health issues should be taken into consideration.

As CrimeOnline previously reported, the shooting happened around 12:45 p.m. – during the lunch break at Washington Middle School in Albuquerque – where it was just the third day of classes for the academic year.

Amari Asbury, who is in eighth grade, told KOAT-TV that students were fighting outside when one of them took out a gun.

“He brought out the gun, cocked it and all you hear is boom, boom, boom,” Asbury said. “Everybody just starts running.”

Officials say a school resource officer was able to intervene and “de-escalate the situation” by herself. She subsequently detained the 13-year-old boy, identified as Juan Saucedo Jr., who allegedly fired the gun.

Bennie Hargrove, also 13, lost his life the suspect shot him. No one else was killed during the incident.

On Tuesday, Saucedo appeared at the Children’s Court in Albuquerque, marking his first court appearance since the shooting. His court-appointed lawyer, Dennica Torres, argued that the teen should be at home with parents while receiving mental health counseling.

“I don’t think incarceration is appropriate for him given his age, his immaturity, and his mental health issues. So we are asking the court to consider making him CCP-eligible with strict conditions and be released to mom and dad,” Torres said, KOB 4 reports.

After the prosecution argued that the suspect would be a danger to society and himself, Judge Catherine Begaye decided against releasing Saucedo.

“I’ve considered all the information and heard everything you have said here today, at this time I am going to hold the child, the child poses a substantial risk of harm to others. I can’t overlook the allegation of this case.”

Bennie Hargrove’s family, including his grandmother, Vanessa Sawyer, appeared virtually in court to watch the proceedings. Sawyer asked the judge to keep the suspect in jail.

“He went and took out a gun and carried it in his backpack and showed it to others with the intent to use it, and he did use it, he shot it off more than four times, so please take that into consideration,” Sawyer said.

According to the Albuquerque Journal, Saucedo Jr. was a 9-year-old when he witnessed his father, Jose Saucedo Sr. shoot someone. The incident happened in 2018 as Saucedo Jr. reportedly sat in his mother’s vehicle as his father pulled out a gun and starting shooting victim Alex Placencio at a high school.

Placencio survived the attack and said he was shot in the leg and hand.

Although the District Attorney’s Office declined to press charges against Saucedo at the time (citing insufficient evidence and self-defense), they are now considering pressing charges against both Saucedo Sr. and his wife for the middle school shooting. A spokesperson for 2nd Judicial District Attorney Raúl Torrez said that they won’t make the decision, however, until the investigation is complete.

“We will not be able to make a conclusive determination about whether such charges are appropriate in this case until the Albuquerque Police Department completes its investigation into the murder of Bennie Hargrove and provides a detailed account of how Juan Saucedo Jr. was able to access the murder weapon,” the spokesperson said.

Court records indicate the Saucedo family was also involved in another school brawl in 2015. The suspect’s mother, Luz Saucedo, went into a classroom at Zuni Elementary and allegedly attacked another student’s mother.

The incident reportedly started out with hair-pulling, but Saucedo’s daughter then joined in. The victim ended up on the ground, a teacher who witnessed the incident said. The teacher also said she saw Saucedo Sr. in the classroom but wasn’t sure if he joined in the fight

The victim filed a civil lawsuit against Luz Saucedo, but it was eventually dismissed since “matters have been amicably resolved between them.”