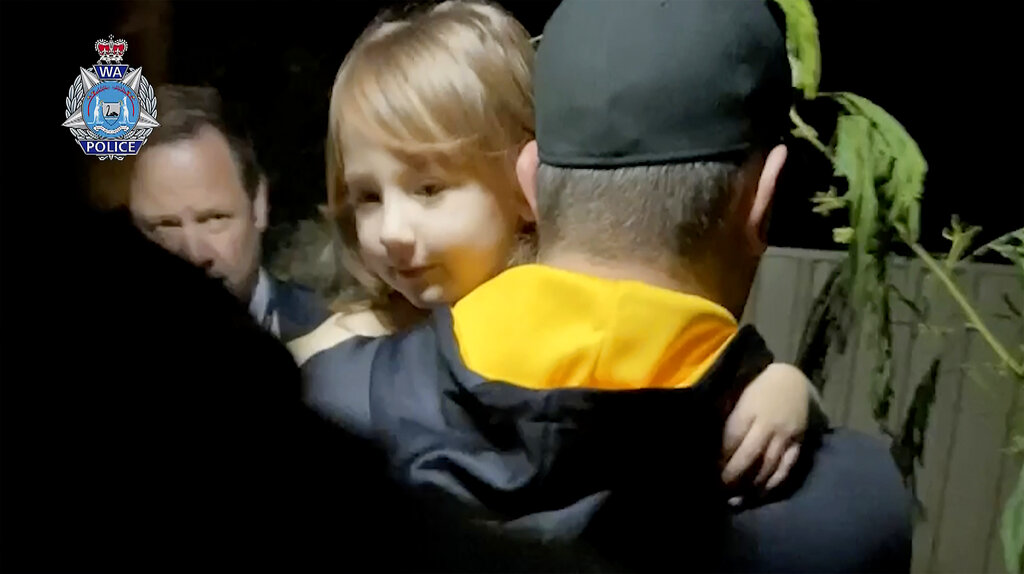 SEE IT: Bodycam Footage of Moment 4-year-old Cleo Smith is Rescued from Bedroom in Stranger’s Home

Bodycam footage captured the dramatic moment 4-year-old Cleo Smith was rescued from a stranger’s home in Australia, around an hour from where she was last seen camping with her family.

On Tuesday night, Police Commissioner Chris Dawson said investigators got the tip they needed that helped them locate the child.

Cleo was found inside a locked home in Carnarvon. Police broke the door down to the home and found Cleo in a pitch-black bedroom by herself. At first, Cleo wouldn’t answer the sergeant, but after he asked a few times, she warmed up to him.

Blaine: “Cleo, my name’s Cameron. How are you? Are you OK? We’re going to take you to see your mummy and daddy, OK? Is that good?”

According to police, the home where they found Cleo was a six-minute drive from her family’s home.

“To see her sitting there in the way that she was, it was just incredible,” Sergeant Blaine, who was one of the four people to help rescue Cleo, said.

Police arrested a 36-year-old man in connection with the case and say he’s not known to the Smith family. The unidentified man was reportedly taken to the hospital with a head injury. He’s currently being questioned but hasn’t been charged yet.

“We’re still questioning the fellow, so it’s difficult for me to expand on it too much more,” Blaine added.

Meanwhile, Cleo seemed to be in good health when the officers rescued her.

“Physically she appears to be in good health but the medical professionals are with her at the moment and it would be wrong for me to say any more than that,” Dawson said.

When Cleo was reunited with her mother, she screamed, “Mummy!” as her mother grabbed the child and hugged her tight.

[Featured Photo: In this image made from a video released by Western Australia Police, a police officer carries rescued girl Cleo Smith in Carnarvon, Australia Wednesday, Nov. 3, 2021. Police smashed their way into a suburban house on Wednesday and rescued the girl whose disappearance from her family’s camping tent on Australia’s remote west coast more than two weeks ago both horrified and captivated the nation. (Western Australia Police via AP)]