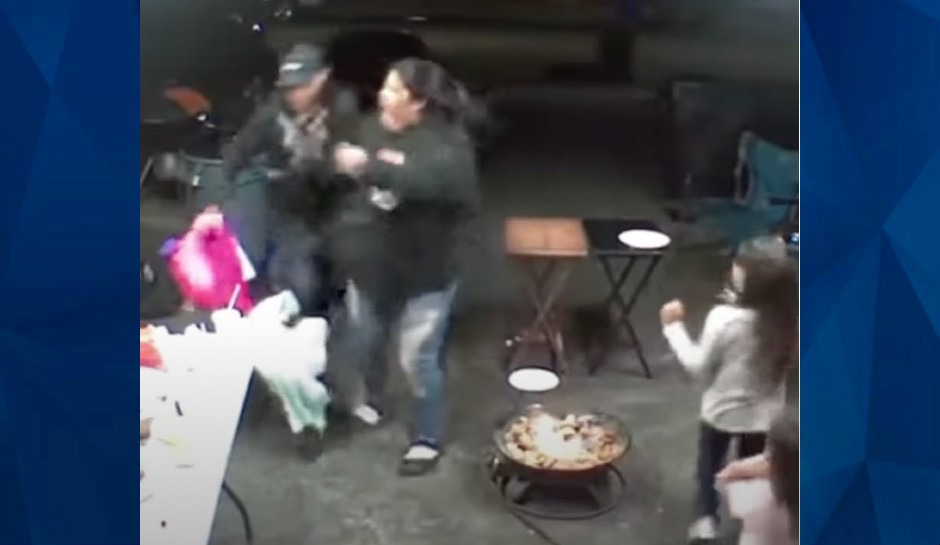 A California mothered fended off an intruder who threatened her young children during a gathering this week.

As KCAL-9 reports, a Rancho Cucamonga woman was sitting with her three young children during a visit to a friend’s home when a strange man raced into the garage where the children were playing. Without missing a beat, the mother jumped up and tackled the intruder, giving her two daughters a chance to run away. The incident was caught on surveillance footage, and the woman — who did not want to be identified — said in an interview with the news station that her 1-year-old child was also in the garage in a high chair, out of the surveillance camera’s view.

“I thought he was gonna take my girls. I also had my one-year-old in the background in a high chair,” the woman told the news station.

The mother said the terrifying scene was not the first time that evening her family had noticed the man; they had reportedly seen a strange man walking in the driveway. His presence concerned them enough that the woman’s husband and a family friend went for a drive to look for the man, who was reportedly heavily under the influence of a drug or drugs.

Fortunately, the two men returned shortly after the man busted into the garage, and as the woman was restraining the suspect by the neck. The two men tackled the suspect, further restraining him.

“That’s when my family friend came in and tackled him to the ground,” the woman said. “[It was] just enough time to get my one year old son in.”

Rancho Cucamonga police have identified the suspect as 31-year-old Rasmuss Peter Rasmussen, who was reportedly so incoherent when police apprehended him in the garage that he had no idea where he was. Despite the seemingly clear evidence in the video, Rasmussen has only been charged with a misdemeanor drug offense and therefore released from jail.

Police told the news station they are recommending a trespassing charge. It is not clear if or when that will happen.

“I don’t think that’s enough,” the mother told KCAL-9. “I think he should go to jail and stay in jail.”