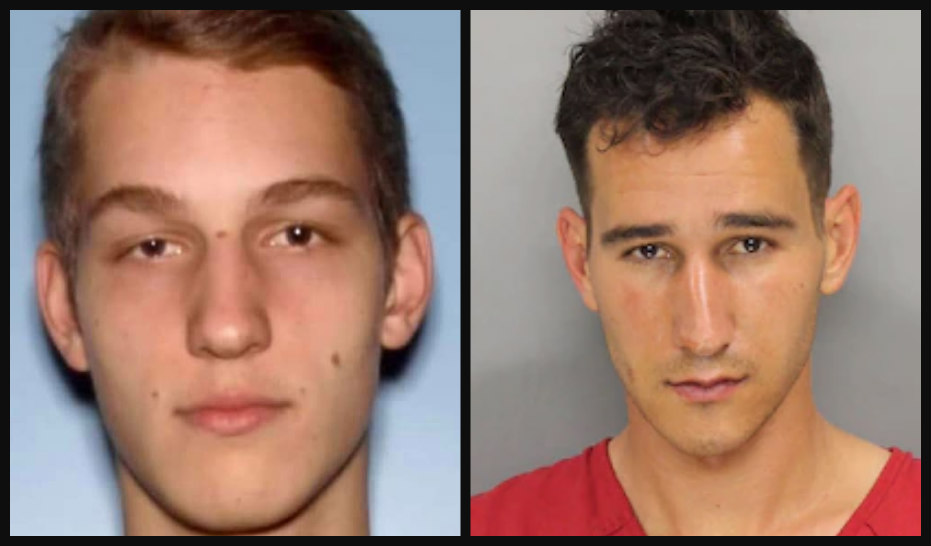 A Georgia man accused of murder and robbery is the brother of another man who died earlier this year after attacking a Pentagon officer.

As CrimeOnline previously reported, Timothy Justin Hicks and Amber Hicks, both 31, were killed inside their Acworth home off of Verbena Drive overnight Wednesday. Cobb police spokesman Sgt. Wayne Delk said during a press conference that authorities found their bodies at around 9:30 a.m. on Thursday morning.

Police arrested Matthew Lanz (pictured left), 22, after he allegedly broke into another home in Sandy Springs on Friday. When an officer responded to the scene, Lanz allegedly stabbed the officer several times in the neck and back before another officer shot him.

According to Channel 2 Action News, Lanz was taken to the hospital for his injuries but is now in custody.

The suspect’s brother, identified as Austin Lanz (pictured right), 27, passed away earlier this year after he killed a police officer near the Pentagon. The previous homeowner at the Acworth home, Phillip Brent, told The Washington Post has Austin Lanz had stalked and harassed them repeatedly, even “smashing through (their) back door with a sledgehammer” when no one was home before, prior to him traveling to D.C.

Brent said Austin Lanz also harassed his former fiance, Elizabeth Wells, although the couple had no idea why he targeted them.

According to Brent, Austin Lanz started sending disturbing pornographic images to his mailbox, but police said there was nothing that could be done unless the couple installed a camera and caught him in the act. Brent ultimately found footage of Austin Lanz leaving an apple juice bottle and a cigarette by his garage door and contacted police.

“We had already expected it was him,” Brent said. “We had to drive by his house often. We were going by on walks. Every time we passed by he was outside smoking a cigarette or would be standing there and would give us the most creepiest unsettling looks … and wave at us.”

Police officers arrived at the Lanz home and spoke to Austin Lanz’s parents about the situation. The parents reportedly apologized and said they would help get their son into therapy, but it’s unclear if that ever happened.

Austin Lanz reportedly denied harassing the couple but admitted that he could see into their bathroom through a bathroom window.

On April 28, 2021, months after Wells and Brent broke up, Brent said he woke up to find a sign in his yard that read, “I’m done wondering for real. Wut is the point of that.”

Brent contacted police who issued a trespassing warning to Austin Lanz. Brent went to stay with his sister for a while after the incident, but Austin Lanz apparently wasn’t done.

Security footage caught him inside Brent’s home with a crowbar with all of the lights on, “as if Lanz was searching the residence for someone or something,”

“It felt pretty obvious his intention was to do harm to us,” Brent said.

Austin Lanz was finally arrested on burglary and trespassing charges. A Cobb County judge eventually reduced Austin Lanz’s bond and allowed him to move to Virginia for work. As soon he stepped off of a bus that took him to D.C., however, Austin Lanz “immediately, without warning” attacked Pentagon police officer, George Gonzalez, with a knife.

Officers in D.C. immediately swarmed the bus. The FBI said that Austin Lanz grabbed Gonzalez’s gun and shot himself after officers surrounded him.