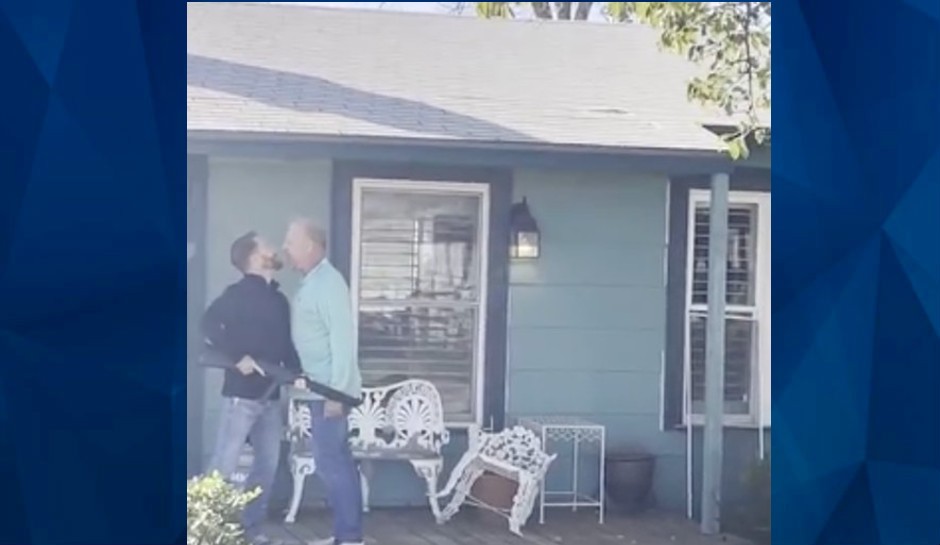 A new video of a fatal shooting early this month appears to undermine the shooter’s claim of self-defense, as he continues to avoid charges, weeks after the killing.

As the Lubbock Avalanche-Journal reports, Chad Read was fatally shot on November 5, after he went to the home of his child’s mother for a custody exchange. Read’s wife Jennifer Read accompanied him but appeared to have remained in the car. When Chad Read discovered that his son was not at the home at the scheduled time for pickup, he began to argue with the boy’s mother Christina Read, an exchange that was captured on the video Jennifer Read has since released through her attorney.

During the encounter in the front yard of the home, Christina Read reportedly told Chad Read that their son was not at her home, but that she would get him. Not every word of the conversation is audible on the video, but the audible parts of the exchange indicate that the boy might have been at his maternal grandmother’s home, and that Christina Read may have told the boy’s father to come back for him at 6 p.m. According to the report, the former couple share two sons, ages 9 and 14, and it is unclear which son Chad Read was intending to pick up that day.

Christina Read’s boyfriend, who the Lubbock Avalanche-Journal has identified as Kyle Carruth, emerged from the home with a rifle in his hand, telling Chad Read to get off his property. Throughout the video, country music can be heard playing, presumably from Jennifer Read’s car stereo.

“I’m glad this is on video, I’m very glad,” Carruth reportedly said, as the men stood close to each other, face to face with their chests touching. Neither man raised a hand to the other at the point, but Read reportedly dared Carruth to use his gun.

At that point, Carruth fired the gun at Chad Read’s feet, the men struggled over the weapon, and the argument became more physical, with Chad Read pushing Carruth away so that he stumbled backwards. A woman presumed to be Jennifer Read repeatedly said “Call 911,” but it is unclear who she was addressing.

Carruth is then seen firing two shots at Chad Read, who dropped to the ground.

The reaction from the surviving individuals at the scene was unusual. None, including Chad Read’s wife, immediately went to him as he lay collapsed on the ground, apparently unresponsive. Jennifer Read, still recording from her car, continued to say “call 911,” while she and Carruth argued about the circumstances leading to the shooting. Carruth told Jennifer Read that “none of you should be here,” and Jennifer Read said that Christina Read should have informed Chad Read that the boy was not at home at the scheduled pickup time. All during this conversation, Chad Read is lying, unmoving, on the ground. Eventually, the video darkens, and it appears that Jennifer Read approached her husband, at which point she appeared to understand the gravity of the situation.

“You really did it!” she can be heard exclaiming, before the video ends.

The relationship dynamics of the involved parties are complex. According to the Lubbock Avalanche-Journal, Kyle Carruth is very recently divorced from Anne Marie Carruth, the judge of the 72nd District Court in Lubbock and Crosby counties. The report indicates that the news outlet was able to confirm the suspect’s identity by obtaining an affidavit Anne Marie Carruth filed in connection to the divorce.

In the affidavit submitted on November 8, Anne Marie Carruth stated that she was “notified that my husband, William Kyle Carruth, is under investigation for the shooting and killing of his girlfriend’s children’s father after he attempted to pick up his children late Friday afternoon. My knowledge of the incident is very limited at this time and it is my understanding that the police are still investigating.”

Kyle Carruth’s attorney David M. Guinn has argued that the shooting was self-defense.

“All Texans may lawfully brandish a firearm to protect themselves, their property and their business.” Guinn told EverythingLubbock.com.

“When Kyle did that, Chad Read advanced on him,” Guinn said. “And instantaneously, he tried to take the gun away from Kyle … In doing so he was powerful enough to sling Kyle 180 degrees around on Kyle’s patio.”

The attorney said he believes Carruth has not been arrested because investigators do not have probable cause.

As the Lubbok Avalanche-Journal reports, Jennifer Read has filed for custody of her two stepchildren.

“The children are aware that Kyle Carruth shot and killed their father in front of their mother, step-brother, and myself,” Read stated in an affidavit obtained by the news outlet.

“Christina’s decision to allow either of these children to be in Kyle Carruth’s presence has caused, and continues to cause, significant impairment of their emotional well-being. The oldest child has expressed to me that he blames his mother for the shooting, and that he will run away from home if he sees Kyle there again.”