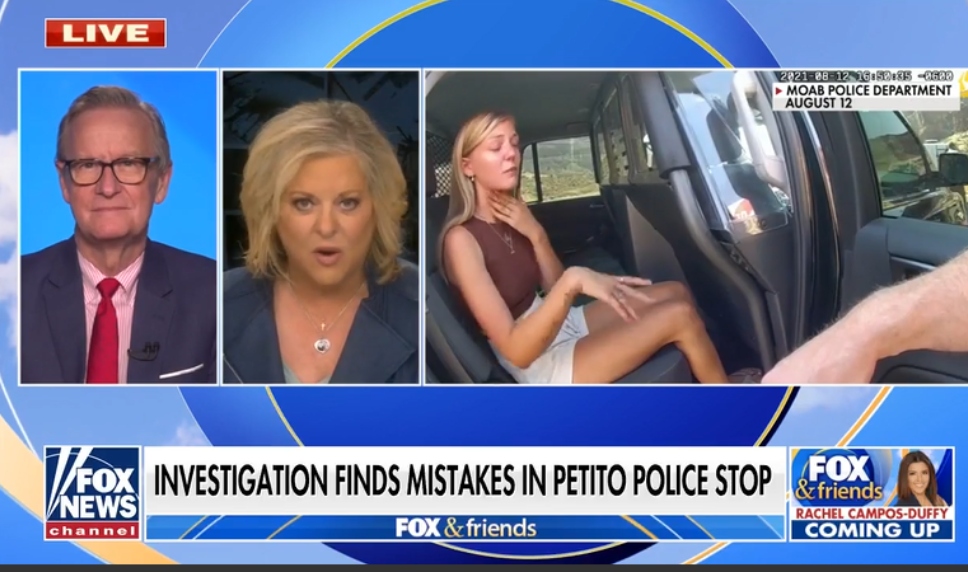 CrimeOnline’s Nancy Grace has responded to the report stating that police in Moab, Utah, made “unintentional errors” after the pulled over Brian Laundrie and Gabby Petito in response to a 911 call.

As CrimeOnline previously reported, Moab police stopped Petito’s van, which Laundrie was driving, on August 12 after at least one witness called 911 to report a disturbance involving the couple outside a food market. Though a 911 call said that Laundrie appearing to be assaulting Petito, the 22-year-old woman was deemed the aggressor after police stopped the couple and interviewed them separately. Petito fell out of contact with her family later that month, and her body was found in September in a national park in Wyoming. Investigators believe she died of strangulation.

Laundrie was never questioned by police as he disappeared from his home in Florida days before Petito was found dead. Laundrie’s remains were found in a Florida nature preserve in October. Investigators reportedly believe that he died of a self-inflicted gunshot wound.

After the traffic stop, Moab police arranged for Laundrie to get a hotel room for the night and advised the couple to stay out of contact at least until the next day. As police body cam footage showed, the officers discussed arresting Petito on a domestic assault charge but ultimately decided not to take her into custody.

The investigation into the incident was conducted by the Price Police Department, and the report concluded that the responding officers made several mistakes, including never speaking to the person who made a 911 stating that Laundrie appeared to be assaulting Petito. The officers focused too much on Petito’s admission that the struck Laundrie in the shoulder in the van after seeing the police lights, and seemed to dismiss evidence that Petito was a victim of assault.

“The officers seemed distracted by the center line swerve and curb strike, and the admission that Gabby had punched Brian in the shoulder when the (police) lights were activated,” the report states. “They spend the majority of the investigation pursuing this allegation, while the reason for the initial detention (the two 911 calls reporting a man shoving/slapping a woman) fell by the wayside. Even when Gabby reports a battery that caused injury, her statement is entirely ignored because the officers seem to be operating under a confirmation bias that influenced how they interpret the evidence and their theory of the case.”

As noted on the recent “Fox and Friends” segment featuring Nancy Grace, the report also says that officers erred in failing to take Petito into custody.

Grace expressed her shock that the report finding would still cast Petito as the aggressor, despite her murder later that month.

“The biggest problem, right now, is that we are still denying what happened to Gabby,” Nancy said. “This was mishandled. She’s deemed the aggressor even now?”

“The classic symptoms of her being a better woman were all there,” Nancy continued. “They want to tell me that nothing [they could have done] would have made a difference? That is B.S.”

“They had [Laundrie] in their grip and let it disappear. So they can make themselves feel better with this ‘report’ that a neighboring jurisdiction did and by putting officers on ‘probation’ … that means nothing to me. They failed, and she’s dead.”