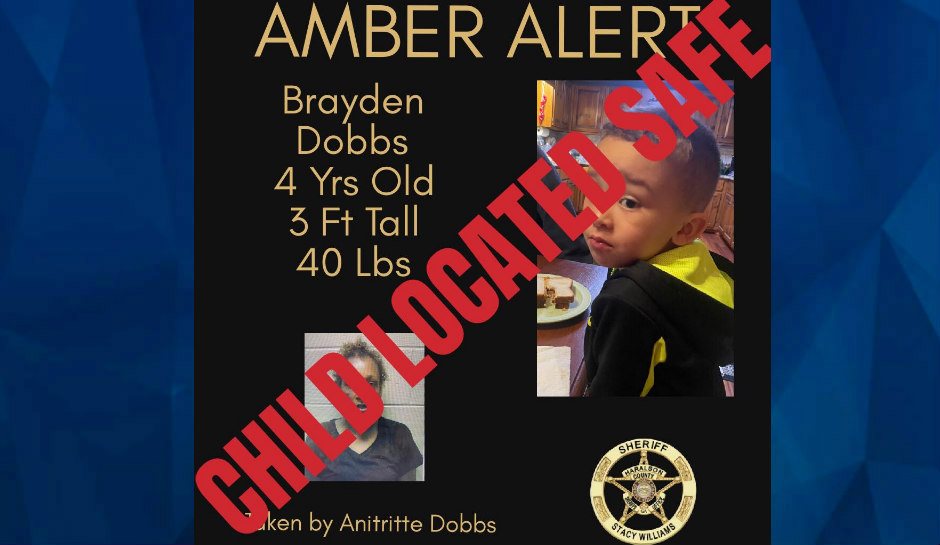 An AMBER Alert for a 5-year-old Georgia boy has been canceled. The Haralson County Sheriff’s Office says Brayden Dobbs was found safe in Douglasville with his mother, Anitritte Boyd Dobbs.

Boyd Dobbs was arrested and charged with aggravated assault and possession of a firearm by a convicted felon.

An Amber Alert has been issued for a 5-year-old Georgia boy after his father was shot Friday morning, police said.

According to a spokesperson from the Haralson County Sheriff’s Office, Brayden Lee Dobbs was abducted from his father’s home near Buchanan, off of Bethlehem Church Road, at around 6 a.m. The child’s mother, 42-year-old Anitritte Boyd Dobbs, and an unknown male are accused of taking the boy.

While at the victim’s home, a struggle broke out that ended with Brayden’s father, identified as Lee Dobbs, with a gunshot wound. Police said the unknown man shot Lee Dobbs, then fled with Boyd Dobbs in what neighbors believe was a black Dodge Charger.

“Investigators are pulling video evidence and hope to have the unknown male identified soon,” the sheriff’s office said.

Lee Dobbs’ medical condition is currently unknown, according to AJC.

Haralson police called the incident an “active investigation,” but little else is known about the child’s circumstances.

Brayden is described as a biracial child who stands around three feet tall and weighs about 40 pounds.