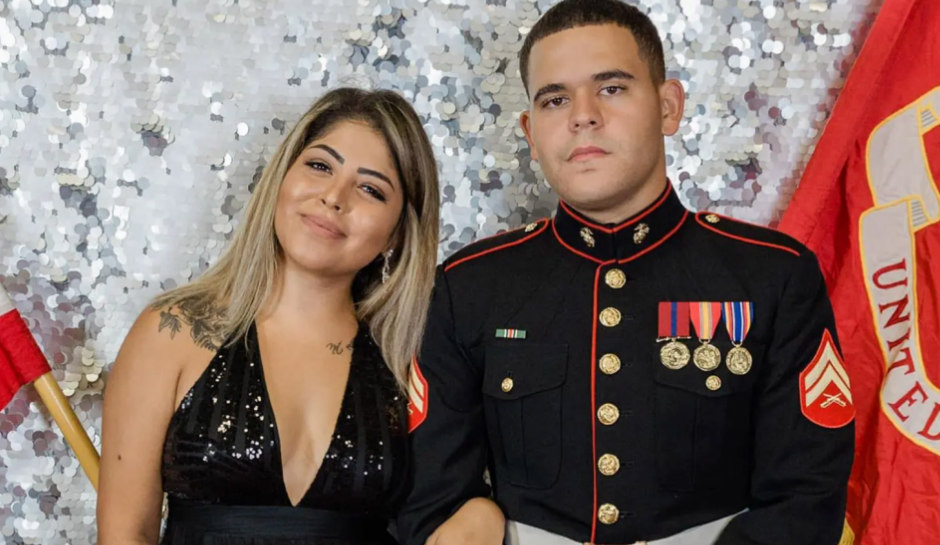 An active duty Marine has been charged with second degree murder for the brutal stabbing death of his pregnant ex-wife during an argument on a busy freeway in Hawaii last week.

According to Honolulu PD, Bryant Tejada-Castillo, 29, a Marine in the 3rd Littoral Combat Team, stationed in Kanehoe, is accused of stabbing Dana Alotaibi, 27, on the H-3 Freeway on Wednesday night. His bail has been set at $1 million, according to KITV.

Witnesses to the horrifying attack observed a male standing over a female stabbing her repeatedly. One of those witnesses, who did not want to be named, said he initially stopped to help break up what he thought was a fight.

Others soon stopped vehicles and attempted to restrain Tejada-Castillo and offer first aid to Alotaibi.

The first witness said he was trained in CPR, but quickly realized the victim was fading fast.

“You know obviously when we’re doing CPR there’s no pulse, they didn’t get a pulse the whole time, and it was just her face, she just looked past the point of no return, you know,” he said.

The Marine was able to break free and run into the nearby woods, where he reportedly stabbed himself with the same knife used to kill his ex-wife before police located him.

He was taken into custody and transported to a local hospital for treatment of his self-inflicted wounds, the New York Post reported.

The pregnant victim was pronounced dead at a Hawaii hospital following the horrifying public attack.

Friends of Alotaibi said she had tried to get out of the abusive relationship and that military police had ordered her husband not to contact her, Hawaii News Now said.

The victim documented the alleged abusive relationship on YouTube and other social media platforms. A YouTube video posted in January shows Alotaibi talking on the phone with the National Suicide Prevention Hotline, crying and saying the military did nothing after she reported multiple cases of violence and infidelity.

Alotaibi’s mother, Natalia Cespedes, said her daughter sent her pictures and messages documenting the abuse she sustained from her husband. The heartbroken mother from Virginia says the couple was married for almost three years.

In an interview with Hawaii News Now, Alotaibi’s mother said she advised her daughter to report Tejeda-Castillo to his command and police.

“She sent me like a picture with all these bruises all over her body,” Cespedes said, adding that Alotaibi was brave to speak out.

She said her daughter was able to get a no contact order on her husband, the military’s version of a restraining order. But Cespedes says she’s disappointed more wasn’t done to protect her.

The distraught mother said her daughter planned to return home to Virginia to have her baby and be near her family.

The Marines issued the following statement:

“We can confirm that the Marine suspect’s command was engaged with both him and the victim, and were responsive to those allegations and concerns that the command was made aware of. Due to the ongoing nature of the criminal investigation, it would be inappropriate to comment further on this topic.”

The Honolulu Police Department and the Department of the Prosecutors’ Office domestic team will review past domestic violence incidents, both documented and undocumented, in the ongoing investigation, according to the Post.