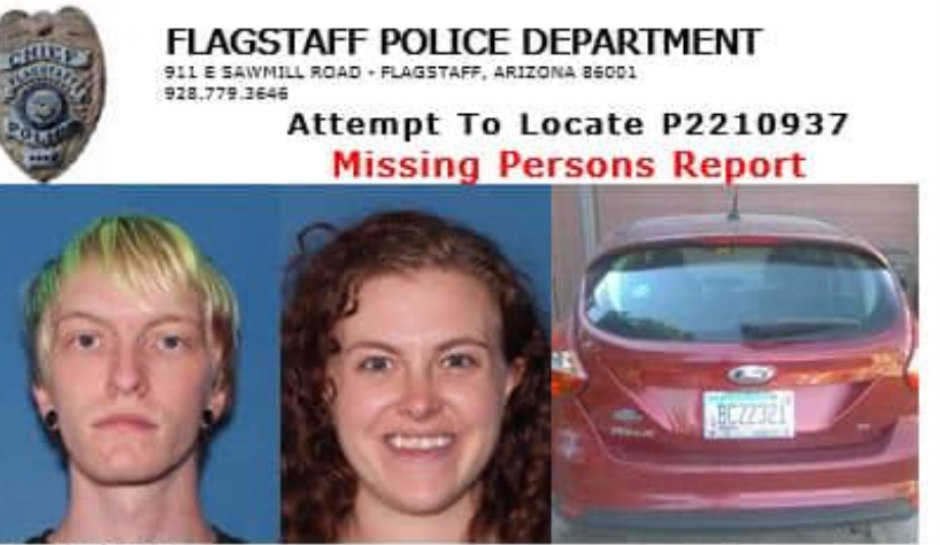 Family and friends of an Arizona couple are hoping to find out where they are after the pair mysteriously vanished a little over two weeks ago.

Lyla Zeller and her fiancé, Jacob Flynn, told friends they planned to stay at a hotel on August 12 and have been missing since. Friends say they were last seen in Flagstaff, in a 2013 four-door red Ford Focus with the Arizona license plate, BCZ2321. The back bumper has “yellow paint transfer from a parking pole” on the passenger side.

“As time kept creeping on I got more and more worried. Now, it’s all worry,” friend Erin Wood told the Arizona Daily Sun.

The pair share a 7-year-old son together and Zeller has a 6-year-old son from a previous relationship. Wood told the outlet that he had recently gotten temporary custody of the 6-year-old.

Wood said Flynn and Zeller had planned to meet him on August 13 for a play date but they never arrived. He subsequently went to Zeller’s mother, Anne Marie Zeller, who said she hadn’t seen or heard from them either.

Anne Marie reportedly said that Flynn has pancreatitis and she’s concerned about her health.

Meanwhile, the Coconino County Search and Rescue said that the couple’s cellphone last pinged on August 12 at the Mount Elden tower, which likely means they were in the eastern area of Flagstaff. Numerous volunteers signed up to help the team with the search.