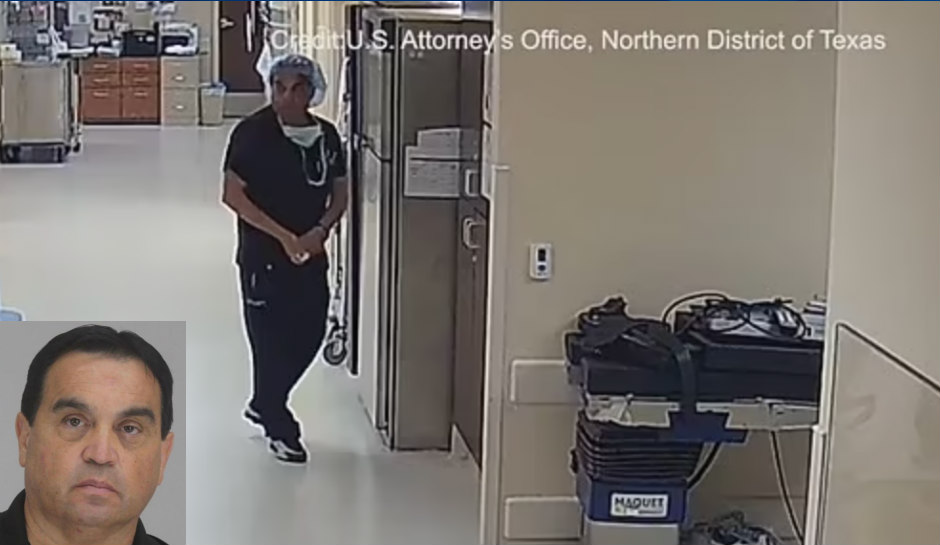 Raynaldo Rivera Ortiz Jr, 59, allegedly injected nerve blocking agents and other drugs into IV bags at the Baylor Scott & White Surgicare in North Dallas between May 26 and August 24 causing multiple cardiac emergencies, including one death, the US Attorney’s Office for the Northern District of Texas said.

As CrimeOnline previously reported, the death was a fellow anesthesiologist at the clinic, 55-year-old Melanie Kasper, who died on June 21 after experiencing a medical emergency and treating herself with an IV saline bag she’d taken home from the surgery center.

According to the US Attorney’s Office, an autopsy found that she died from a lethal dose of bupivacaine, a nerve-blocking agent used during the administration of anesthesia. It is not often abused.

In a second clip, recorded on August 19, Ortiz is allegedly seen at around 10:24 a.m. while hiding a saline pouch under a folder. He’s then seen swapping the IV bag with one in the warming fridge.

The solution was reportedly administered to a 54-year-old woman, according to the criminal complaint. The patient, who underwent abdominal surgery at the time, subsequently developed an emergency cardiac issue.

Personnel at the center became suspicious and identified 10 other cardiac emergencies that took place “during otherwise unremarkable surgeries” between May and August.

Most of the incidents took place during lengthy surgeries during which extra IV bags were retrieved from a bag warmer during the surgery. Personnel stabilized each of the patients with emergency measures.

According to the complaint, none of the incidents took place during Ortiz’s surgeries, and they began two days after he was notified of a disciplinary inquiry into an “incident during which he allegedly ‘deviated from the standard of care’ during an anesthesia procedure when a patient experienced a medical emergency.”

All 12 identified incidents occurred around the same time Ortiz was working at the center, and none took place while he was on vacation.

Ortiz has a history of disciplinary actions, the complaint says, and he complained to other doctors that the center was trying to “crucify” him.

Ortiz faces a maximum penalty of life in prison. He remains behind bars without bail. Check back for updates.