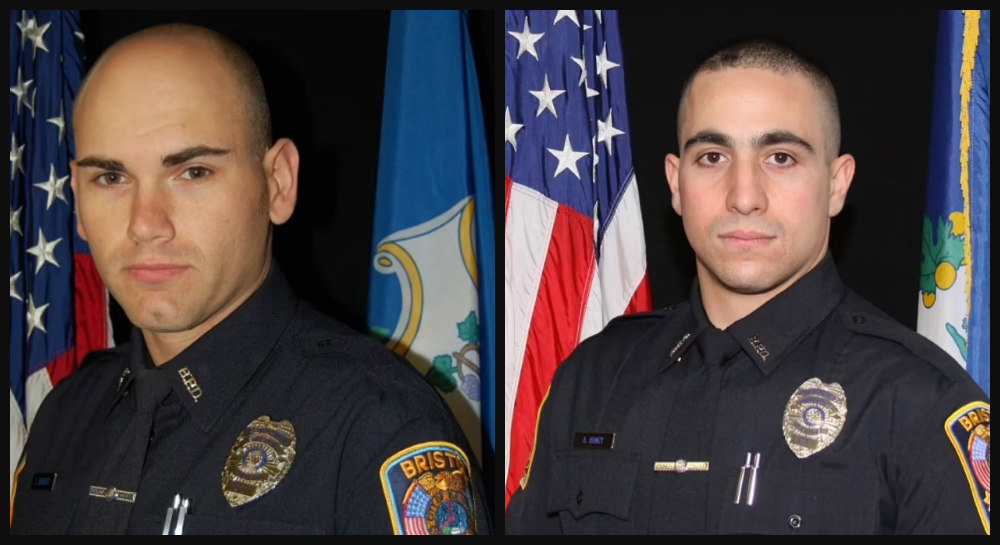 Two Connecticut officers have died after police say they were lured to a Bristol Home on Wednesday, where a male suspect opened fire on them.

According to The New York Times, the deceased officers have been identified as Dustin DeMonte, 35, and Alex Hamzy, 34. The suspect has been identified as 35-year-old Nicholas Brutcher. A third officer, identified as Alec Iurato, 26, was also shot and is currently at Saint Francis Hospital.

The incident happened at around 10:30 p.m. at a Bristol residence off of Redstone Hill. Brutcher was shot dead at the scene and his brother, Nathan, was wounded during the shooting.

Connecticut State Police said in a statement that the officers were dispatched to a domestic disturbance, which may have been a ruse and a “deliberate act to lure” the officers to the home.

Brutcher was standing outside of the residence when police arrived, the State Police said. He then started shooting at the officers, killing DeMonte at the scene. Hamzy was rushed to a local hospital where he was pronounced dead. Iurato was shot and is currently recovering after surgery.

Nathan Brutcher was also taken to a local hospital for medical treatment. His condition is unknown and it’s not clear at this time whether his brother or the officers shot him.

“I join with New Britain State’s Attorney Christian M. Watson and the entire Division of Criminal Justice in expressing our deepest sympathies to the families and friends of Bristol Police Sgt. Dustin Demonte and Officer Alex Hamzy who were tragically killed in the line of duty on Wednesday night,” Chief State’s Attorney Patrick Griffin said during a press statement.

“We are praying and hopeful that Officer Alec Iurato is able to fully recover from injuries he suffered in the tragedy.”