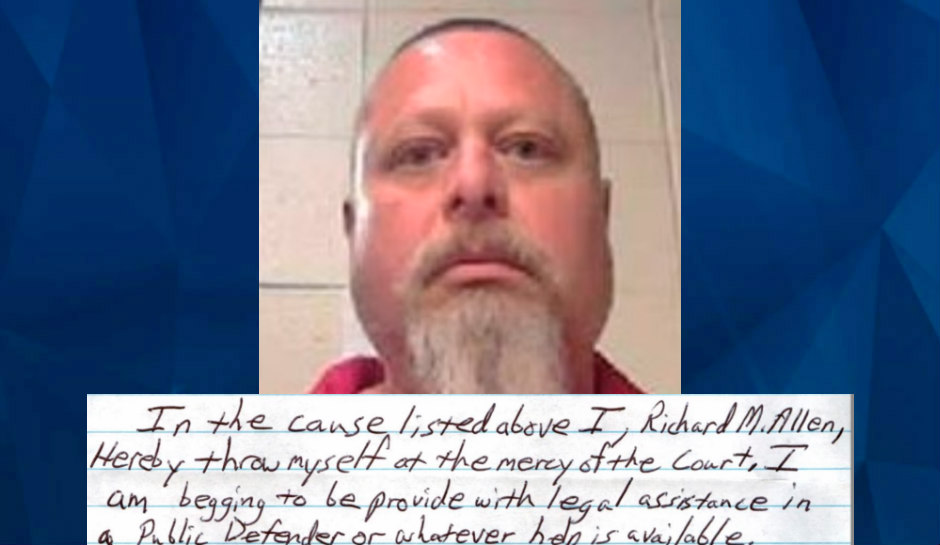 Alleged child killer, Richard Allen, accused of murdering two Indiana girls in 2017, is reportedly pleading for a public defender after learning the costs of a defense lawyer.

In a handwritten letter to the Carroll Circuit Court, 50-year-old Allen wrote that he’s “begging for legal assistance in a public defender or whatever help is available,” according to WISH-TV.

As CrimeOnline previously, Indiana law enforcement announced earlier this month the arrest of Allen; he’s been charged with two counts of murder in connection with the 2017 death of Abby Williams, 14, and Libby German, 13.

Police found the girls’ bodies on Valentine’s Day 2017, near the abandoned Monon High Bridge in Delphi, after they took an afternoon hike the previous day.

Allen also touched on the expenses of finding an attorney to represent him, indicating that he didn’t realize the costs involved.

“At my initial hearing on Oct. 28, 2022 I asked to find representation for myself. However, at the time I had no clue how expensive it would be just to talk to someone,” Allen wrote.

First words from man charged in Delphi Murders – In handwritten letter, Richard Allen begs court to appoint a public defender: "I had no clue how expensive it would be just to talk to someone," Writes wife had to abandon her job and home for her safety. pic.twitter.com/spUwqjHEzj

Meanwhile, Allen’s wife has reportedly moved out of the Delphi home, following the news of his arrest. Allen wrote that his wife is no longer employed due to threats.

The victims took a hiking trip at the abandoned Monon High Bridge in Delphi on February 13, 2017, in an outing that was meant to be for a few hours. The girls took photos while strolling across the bridge, but as time passed and their family didn’t hear from them, police were called for assistance.

One of the girls, likely sensing danger, recorded the man’s voice on her cellphone. She also managed to take a photo and record a small clip of the suspect. Although his face isn’t clear in the picture, it was enough to give authorities a general description. Since then, they’ve been poring through thousands of tips, leading to Allen’s arrest.

“This investigation is still very ongoing. We are keeping the tip line open, not only about Richard Allen but any other person,” Carroll County Prosecutor Nick McLeland said. “We cannot talk about the evidence in the probable cause or the charging information … today’s about Abby and Libby, focusing on them.”