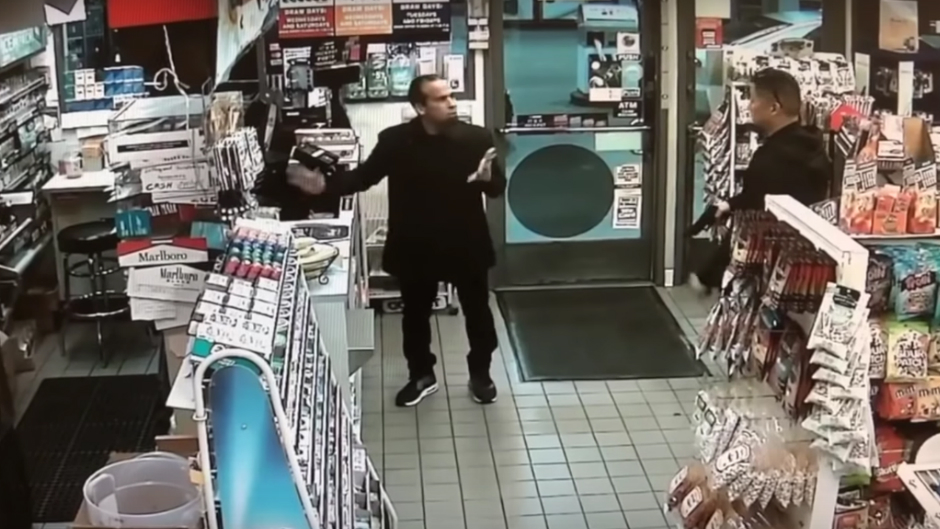 Surveillance cameras reportedly captured the moment an off-duty cop drew his gun on a man he wrongly believed was stealing a pack of mints from a California service station.

Per The Orange County Register, Jose Arreola, 49, had actually purchased the $1.19 pack of Mentos from a Chevron Food Mart in Orange County on March 16 when a Buena Park police officer pulled a gun on him.

In the video, Arreola can be heard asking the clerk how much the mints cost. After giving him the money, Arreola is seen putting the mints in his pocket as he waits for his change.

It’s then when a plain-clothes officer can be heard telling Arreola from behind, “Hey, give that back. I’m a police officer.”

Bewildered, Arreola turns around to see an officer dressed in all black. Putting the Mentos down, Arreola is heard saying, “Oh, I paid for it!”

A message from our Chief of Police:In an effort to be transparent, I am sharing an article with you that was in the OC…

Posted by Buena Park Police Department on Friday, May 4, 2018

From there, the off-duty cop tells Arreola to get his cash and leave, which is met by Arreola repeating that he paid for the item. The officer then consults with the clerk, who confirms twice that Arreola did indeed purchase the Mentos and wasn’t stealing them.

“It’s been a month and I still can’t shake it,” Arreola told The Register. “It was traumatic, the whole incident.”

However, on Friday, Chief of Police Corey S. Sianez issued a statement through the department’s Facebook page, where he revealed that Arreola filed a complaint against the officer and retained an attorney. The statement read in part:

“The video of the incident clearly shows our officer drawing his gun, but not pointing it, at a subject he allegedly believed was committing a theft inside the mini-mart of a Chevron gas station in Buena Park…I want you to know that after I watched the video I found it to be disturbing, as I’m sure it was to you…I can definitely assure you that our investigation will be thorough and if the officer is found to be in violation of any policies and procedures, he will be held accountable.”

Arreola and his wife told KCBS that the agency has declined to reveal the officer’s name. They said they hope to reach a settlement out of court.

“The hardest thing for me was, believe it or not, it wasn’t really the gun,” the California man said. “It was his arrogance, his way of talking to me…He treated me like a piece of trash.”