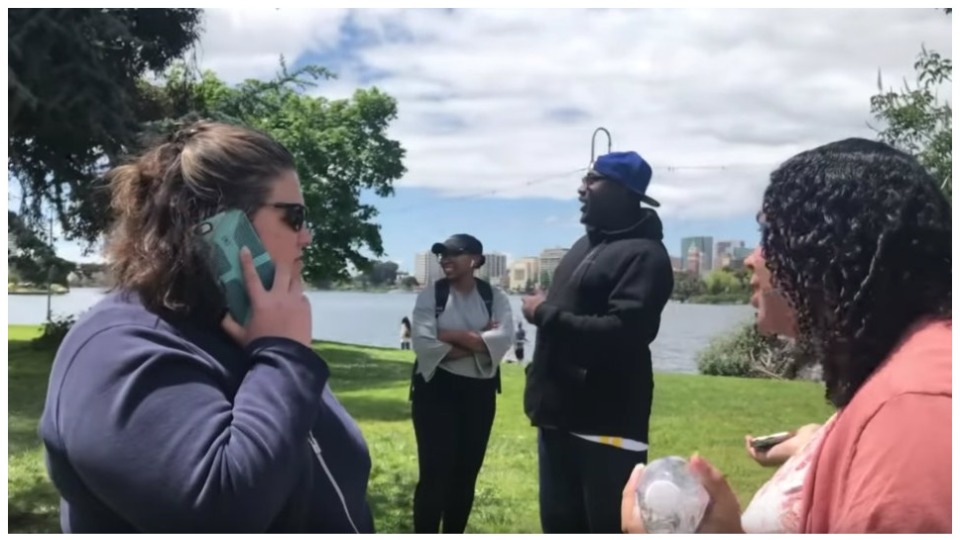 A California woman who called police on a black family having a barbecue in Oakland last month has sparked national outrage during a time when racial tensions have made national headlines across the country.

The alleged crime? According to the woman who filmed the incident April 29, authorities were called to the scene at Lake Merritt after a black family grilled in an area designated for using non-charcoal grills, while using a charcoal grill.

“What’s going on here?” the woman filming the incident, identified by the Huffington Post as Michelle Snider, asked the unidentified white woman who was allegedly on the phone with police.

“It’s illegal to have a charcoal grill in the park…no charcoal grills are allowed in the park,” the woman responds, claiming that “it costs extra money from our city to do things when children get injured when they don’t properly dispose of coals.”

Snider alleged the only reason the woman was calling police was because the family enjoying a barbecue were black. The unidentified woman vehemently defended her claim that charcoal grills were not allowed in the park, and said the situation had “nothing to do with race.”

At one point during the confrontation, Snider alleged that the white woman snatched a card out of Snider’s hand, refusing to give it back. Although the incident was not captured on video, Snider repeatedly asked the woman to return the card as she followed her across the street to a convenience store. At this point, authorities arrived and the woman who called them alleged that she was being harassed and assaulted.

“I reported over two hours ago some people were illegally grilling in the park with a charcoal grill where they’re not supposed to,” the white woman stated through tears. “I was waiting there for a response because I was told they were coming. After two hours, I just called the non-emergency line, and in the interim these people came up and started harassing me, physically pushing me.”

Authorities responding to the incident chose not to issue any citations after detaining and questioning the family for an hour.

“In a city that needs significant policing services, we can’t have those precious expensive resources squandered in a frivolous way,” Oakland Councilmember Lynette Gibson McElhaney told the newspaper, adding that “police are not private security for any white person that’s offended by the presence of black folks in our public areas.”

The incident drew thousands to come together, gathering at the same park to peacefully support the family and to celebrate the black community through song and dance.

Michael Swanson Jr. filmed the celebration via Facebook Live, where he captioned the footage.

“This how we feel about mad a** Oakland gentrifiers.”

Many responded to Swanson’s film with praise and offerings of support.

“Thousands of the black community of Oakland showed up to the barbecue, turn the music up, and do the electric slide to let white racists know that they are here to stay,” wrote Steven Walker. “Sweet revenge won the war without firing a single shot.”

“This right here!,” Donna Maclyn exclaimed. “Love conquers hate all day! Glad it was all shades of people there. Fists up from Detroit.”

As of late, racial tensions in the United States appear to be on the rise and have captured headlines across the nation. On April 12, two black men were led out of a Philadelphia Starbucks after a white worker called the authorities because they hadn’t yet ordered anything. The two men said they were waiting on a third party for a business meeting regarding realty.

On April 21, police were called to a Pennsylvania country club by a white employee of the club who claimed a group of black women were golfing too slow.

Just days ago, authorities were called regarding a black Yale University student who fell asleep in a common area of the school, according to the Independent. Only two weeks prior, three black Airbnb guests were apprehended by police while checking out of a rental, reports indy100.