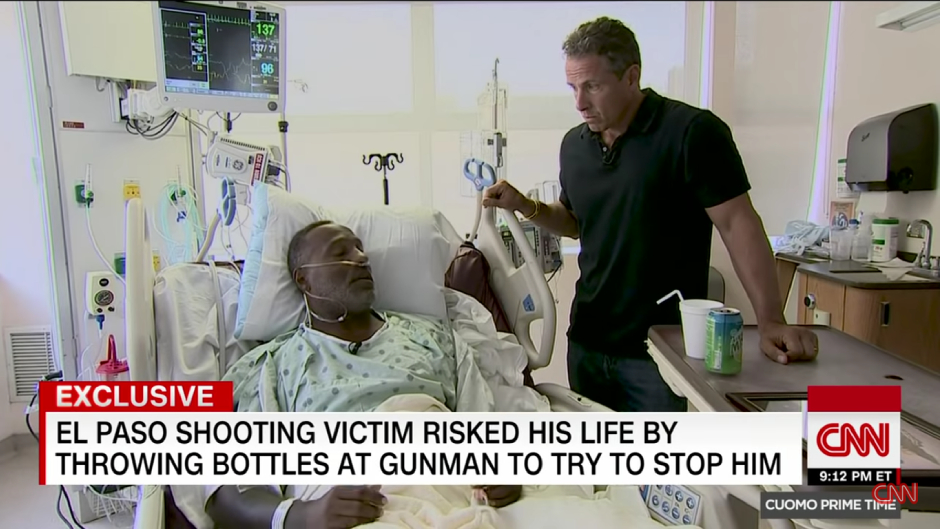 Earnest Christopher Grant, the El Paso Walmart shooting victim who claimed he was wounded in the back as he threw soda bottles at the shooter to distract him, has defended his story after police claimed surveillance footage contradicted his story.

In a statement issued to Crime Online, Rosana Narvaez, the lawyer who’s representing Grant, 50, said he “stands by” what he told police and CNN’s Chris Cuomo (video below). The statement noted that Grant repeatedly told Cuomo that he wasn’t a hero and that he did what anyone would do in the same situation.

“It is irresponsible and inappropriate to publicly shame Mr. Grant after everything he’s been through, especially when his well-being, both physical and mental, should be [the] priority,” it reads.

Grant’s story came under scrutiny earlier this month when Secret Service detained him before he could attend a White House event celebrating his apparent bravery in the August 3 attack. El Paso police spokesman Seargent Enrique Carrillo went on to tell reporters that Grant’s account of what happened at the Walmart was fabricated.

“The video evidence of the scene does not support his [Grant] assertions. His actions were captured by surveillance cameras, but they amount to an act of self-preservation, nothing more, nothing less,” Carrillo said, according to KFOX.

Authorities have yet to release the surveillance footage or disclose what it shows Grant doing during the shooting that left 22 people dead.

Further, Grant’s lawyer said that the video couldn’t capture what he and the other victims endured that day. She also alleged that nobody outside of law enforcement has seen the video.

The attorney went on to denounce “unprofessional and inaccurate claims” about Grant and said he won’t be making any public statements as he recovers from his injuries.

“Mr. Grant did not ask to become a victim in the tragedy that befell him and the community of El Paso,” the press release concludes. “Mr. Grant hopes to become a part of the process that will prevent an event like this ever happening again, in El Paso or anywhere in America.”