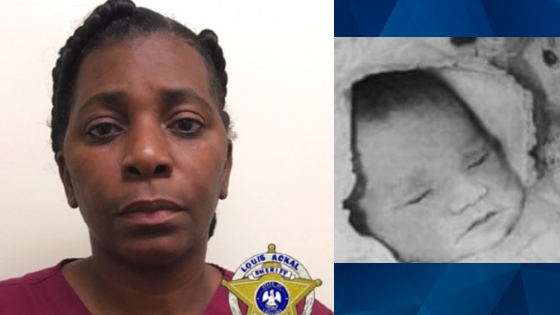 A cold case investigator in Louisiana’s Iberia Parish Sheriff’s Office picked up a 25-year-old case and found a DNA match for a newborn found dead in a car wash trash drum in 1994.

Sonia Charles, 50, was arrested Wednesday and charged with first degree murder. Officials say she left Baby Jane Doe in a trash can behind Bob’s Car Wash in Jeanerette, Louisiana, where the tot died of hyperthermia.

Then-Jeanerette Alderman Bob Fontenot, who owned the car wash, found the baby early on the morning of January 24, 1994, when he was taking out the trash, the Daily Advertiser reported at the time. Iberia Parish Coroner James Falterman said the little girl was alive when she was thrown away, placenta and umbilical cord still attached.

Three hundred people gathered for Baby Jane Doe’s funeral at Beau Pre Cemetery, and the community came donated everything for the ceremony — including the Raggedy Ann dolly the girl was buried with. But police were never able to make a connection to anyone in the small community at the time, and the case eventually faded from memory, The Advocate reported.

Det Scott Hotard reopened the case, however, following new leads. The Acadiana Criminalistics Laboratory (ACL) reexamined evidence in the case and found a familial match in the Combined DNA Index System (CODIS). That let Hotard to Charles, and the ACL confirmed that Charles was the mother.

“It hit hard in a small community. Everyone took it kind of personally,” sheriff’s office spokesman Maj Wendell Raborn said. “Every homicide, every death somehow needs to be accounted for. We do our best on these old cases and if we can solve one it’s a plus for the community.”

Raborn spoke with Nancy Grace earlier this month, saying it was possible the case could be reopened, but he thought at the time it would mean exhuming the little girl’s body. But, it turned out, that wasn’t necessary.