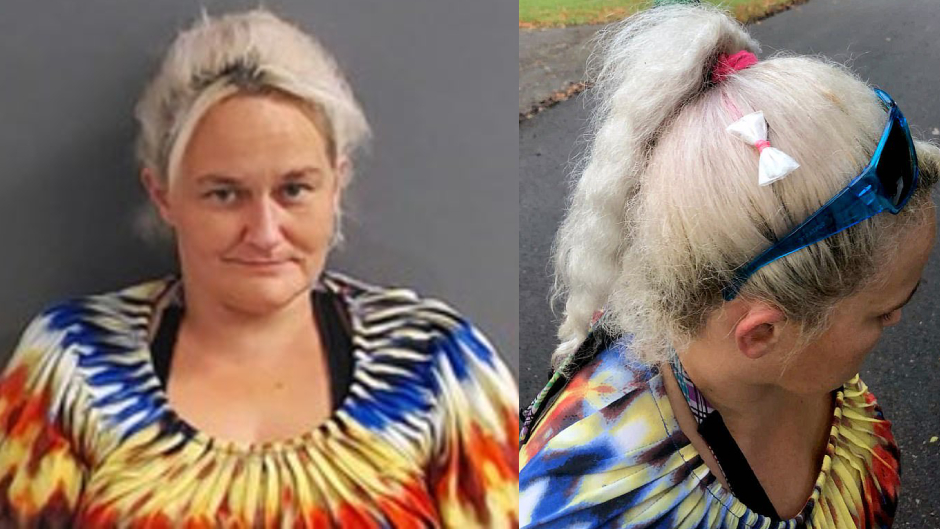 SEE IT! Arkansas platinum blonde styles hair with bag of meth as a BOW

Late last month, Arkansas police arrested a woman after reportedly spotting a bow in her hair that was actually a small plastic bag containing methamphetamine.

According to the Baxter Bulletin, Flippin police officer Kenneth Looney pulled over Jessica Kropp, 38, after noticing the registration for the car she was driving was expired. Kropp reportedly drove for a brief period before stopping, and then claimed she didn’t have insurance or know where the registration was located because she was borrowing the vehicle.

Officer Looney not only confirmed that Kropp’s license was suspended but discovered that she had five warrants out for her arrest.

“As I was detaining Jessica Kropp, I observed what appeared to be a bow in her hair. The bow appeared to be a small, zip-locked bag containing a white crystal-like substance of suspected methamphetamine,” Looney wrote, according to the news outlet. “The baggie had a small rubber band around the middle, giving it a bow shape and was attached to a bobby pin. The substance was affixed to the right side of her head, attached to her hair.”

Looney claimed he asked Kropp, “Are you serious?” before she claimed that she didn’t realize the meth bow was affixed to her hair. The Baxter Bulletin reported that a search of her purse produced multiple bags containing meth and drug paraphernalia, including a vape pen containing THC oil and a second vape pen filled with THC oil and meth.

Kropp was arrested and charged with possession of meth with the intent to deliver, possession of drug paraphernalia, driving with a suspended license, and having no liability insurance. She was jailed on a $23,210 bond.