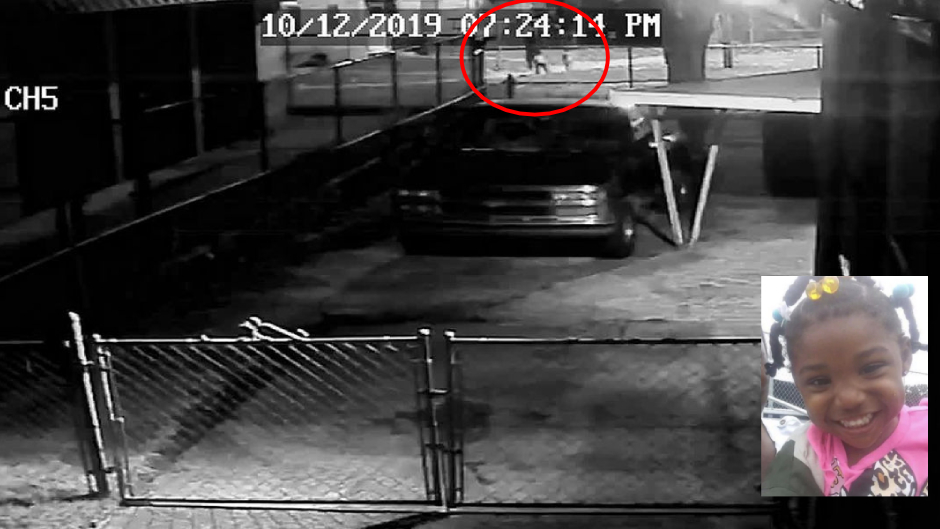 A $33,000 reward is being offered for information leading to Kamille McKinney’s safe return

Authorities have released surveillance footage showing the moments leading up to the abduction of a 3-year-old girl who remains missing nearly a week later.

The 30-second video reportedly shows Kamille McKinney playing with another child at the Tom Brown Village public housing community on Saturday night. A man is seen walking off moments before a second man—with a distinctive limp—approaches the children and exits the camera’s view with them running behind.

Birmingham police Chief Patrick Smith said they believe the first man is a witness who they would like to speak to; the second man, according to Smith, is a suspect. However, authorities would not reveal whether they have identified the suspect or have made contact with him.

Video Surveillance of two men who may have information that can help us locate Cupcake. Kamille Mckinney

The video was recovered from a surveillance camera within the Tom Brown Housing complex at about the same time as Kamille Mckinney was reported missing. If you are one of the people in the video, we need your help with the investigation! Please call the Birmingham Police Department at 205-254-7777.

Authorities noted that the video’s timestamp is incorrect and that it was filmed around the time of McKinney’s reported disappearance.

Smith has said that they believe multiple people are involved in McKinney’s disappearance. Children who were also at the party McKinney attended Saturday night reportedly said that a man handed out candy before putting the barefoot toddler in a Toyota Sequoia and driving off.

On Sunday evening, police detained two persons of interest, Patrick Stallworth, 39, and his girlfriend, Derick Brown, 29, at the Woodside Condominiums in Center Point. A vehicle sought in the ongoing investigation was reportedly also found at the residence.

Stallworth was charged with child pornography after investigators reportedly located photos of underage girls on his phone. The photos did not depict McKinney and he has not been charged in connection with her abduction.

Stallworth was released from custody on Thursday morning after posting a $500,000 bond. Brown remains jailed after her bond was revoked in an unrelated 2018 abduction case involving the Department of Human Resources and her three children.

McKinney was described as being approximately 3 feet tall, weighing 60 pounds, and having brown eyes and black hair. She was last seen wearing a pink and leopard-print Minnie Mouse shirt with leopard-print shorts. She was also wearing blue, white, and yellow hair bows.

Anyone with information regarding Kamille McKinney’s whereabouts should call the Birmingham Police Department tipline at 205-297-8413 or Crime Stoppers at 205-254-7777.