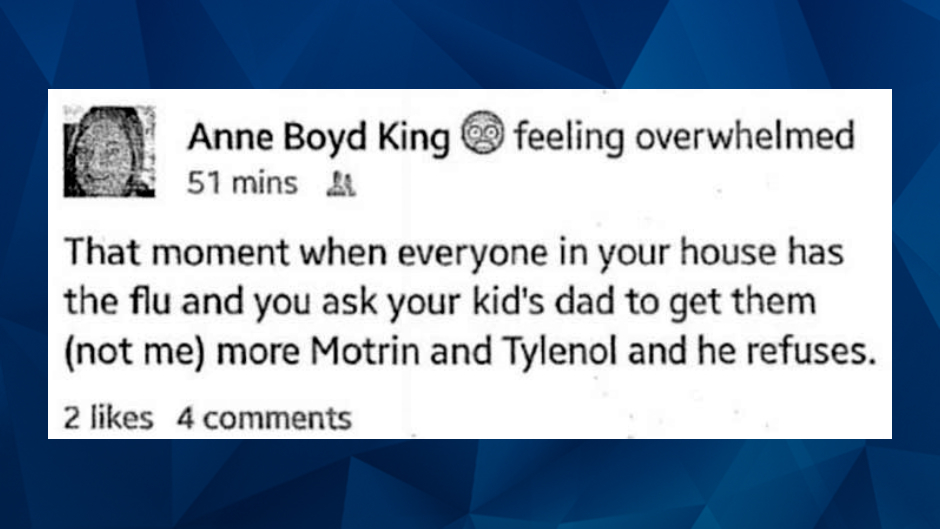 Officials in Georgia have agreed to pay a woman $100,000 nearly five years after a Facebook post she made about her police officer ex-husband resulted in her arrest.

Single mother Anne King wrote the following post about her former husband, Corey King, on January 15, 2015: “That moment when everyone in your house has the flu and you ask your kid’s dad to get them (not me) more Motrin and Tylenol and he refuses.”

WAGA reported that Corey King, a Washington County deputy sheriff, presented the online post to magistrate judge Ralph Todd, who concluded that his ex-wife committed “criminal defamation” by making “derogatory and degrading comments…for the purpose of provoking a breach of the peace.”

The court ruling led to Anne King’s arrest and a five-hour stint in jail before she could post a $1,000 bond. She claimed her ex-husband visited to look at her through a cell door, according to the news station.

The single mother said she tried to talk to Judge Todd about her arrest in 2017 and he maintained that his ruling was constitutional and upheld by the Georgia Law Enforcement Handbook. However, he overlooked a notation on the same page which noted that Georgia’s Supreme Court ruled the criminal defamation law unconstitutional in the 1982 case Willamson v. Georgia.

Further, the Atlanta Journal-Constitution noted that Judge Todd was elected to preside over the Magistrate Court for more than 13 years after retiring from the U.S. Postal Service. He does not have a college or law degree, which is allowed in the state of Georgia.

Anne King had reportedly deleted the aforementioned Facebook post before her arrest. Her ex-husband still took the issue to court because he felt “disrespected” and wasn’t satisfied, according to court documents.

The single mother’s lawyers maintain that their client was protected by her First Amendment right to free speech and accused the courts of abusing their power. Last week Washington County agreed to a settlement and apologized to her as part of a civil suit she filed against the county, police department, and her ex-husband and his colleague.

In March 2018, Judge Todd resigned while under investigation by the Judicial Qualifications Commission for making court rulings that were not upheld by the law. Anne King told the Journal-Constitution that she spoke with several people like her who were subjected to his unjust rulings.

The news outlet reported that Corey King and Washington County Sheriff’s captain Trey Burgamy, the colleague who swore in an affidavit for Anne King’s arrest, kept their jobs with the police department. They argued in a deposition that it was the judge’s sole decision to arrest Anne King.

Though the post that resulted in her arrest was scrubbed from the Internet, Anne King said she put the county’s apology on her Facebook page.

It reads, “We apologize for the pain caused and time wasted including Ms. King being charged and arrested with respect to what was really a personal dispute that should have ended without the involvement of the courts.”